The map is available for download and in print to support local and First Nation governments and concerned citizens engaging with the provincial government and industry to protect what little old-growth is left on the island.

“We have shared our maps, data and recommendations with the new BC government but have not seen meaningful funding tied to protecting old-growth in the 2018 budget. In the absence of leadership by the provincial government, it’s up to local and Indigenous governments, businesses and concerned citizens to step up and insist that the most endangered old-growth rainforest stands are spared from the chainsaws,” said Jens Wieting, senior forest and climate campaigner. “Our new map gives them the information they need.”

BC’s temperate rainforests represent the largest remaining tracts of a globally rare ecosystem covering just 0.5 per cent of the planet’s landmass. Yet the current rate of old-growth logging on Vancouver Island is more than 3 square metres per second, more than 10,000 hectares per year.

“The science and our mapping show immediate steps are needed to protect the most endangered old-growth forest, combined with support for Indigenous-led land-use planning and long-term forestry jobs in second-growth,” said Wieting. “It’s time to move beyond this mindset of short-term profit that leaves communities with scarred landscapes, lost species, a damaged environment and reduced opportunities for diverse economic activities such as tourism and recreation.”

The Sierra Club BC map shows that the remaining 218,000 hectares of the most endangered low-elevation old-growth rainforest with the biggest trees and highest carbon storage per hectare (good and medium productivity forest) now only cover 6.5 per cent of the island. When including poor productivity old-growth (ecosystems with smaller trees), about one quarter of the island remains covered by old-growth forest.

“Taking a closer look at this map and the ecological hit this island has taken, you would be forgiven for thinking this is Madagascar or Sumatra or another part of the world known for rapid destruction of biological richness,” said Wieting. “These endangered old-growth stands are becoming as rare as white rhinos.”

The mandate letter for the Minister of Forests, Lands, Natural Resource Operations and Rural Development, Doug Donaldson, calls for sustainable management of BC’s old-growth forests, but it remains unclear what steps the province is planning to take to protect endangered coastal and inland old-growth ecosystems.

Last week the provincial government announced increased protection for northern goshawk and marbled murrelet, bird species threatened by the loss of old-growth rainforest. The proposal is a step in the right direction, but implementation of the plan will take too long unless interim measures are put in place, and will not be sufficient to halt the ecological degradation of coastal old-growth rainforest ecosystems on Vancouver Island and the south coast. 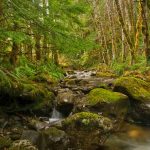