New information compiled by Sierra Club B.C and our allies reveals that logging company TimberWest has dramatically sped up logging in the Great Bear Rainforest and targeted globally endangered rainforest ecosystems before stricter logging regulations come into effect. We have called on the company to freeze their logging operations in the region until we can ensure endangered rainforests will be safe. We have also asked the B.C. government to ensure they aren’t approving new cutting permits until new stricter logging regulations are in place. “Both TimberWest and the B.C. government should freeze logging plans until we have certainty that rare and endangered rainforest ecosystems will be set aside.” said Sierra Club BC’s Jens Wieting.

Our analysis shows that the company significantly increased the rate of logging in this area between 2009 and early 2015. In this period, TimberWest logged more than 4,400 hectares of rainforest (equivalent to 11 times the area of Vancouver’s Stanley Park) in the Great Bear Rainforest. The company also logged more than one million cubic meters over what they had been allocated as Annual Allowable Cut between 2010 and 2014. It is abundantly clear that TimberWest is acting in its own short-term self-interest and against the spirit of the protection offered by the new regulations.

Due to decades of extensive logging, the southern region of the Great Bear Rainforest has very little remaining old-growth forest and very few protected areas.  As a result, many of these forest ecosystems and wildlife species like the Marbled Murrelet that depend on them are now endangered.

Final implementation of Ecosystem-Based Management in the Great Bear Rainforest was due by March 31, 2014. Significant progress has been made to achieve these steps but finalization is delayed and will require ongoing leadership and resources by the B.C. government.

Featured photo by Garth Lens with aerial support by Lighthawk 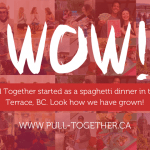 pull-together.ca: Is this what solidarity looks like?
Scroll to top
MENU