Tell your MLA we need climate plans for every target and every sector!

Call on the B.C. government for accountability on climate action.

A year ago, terms like atmospheric rivers and heat domes were not part of our everyday vocabulary. We now understand only too well what havoc they wreak. Last year’s intense heat and unprecedented heavy rains resulted in nearly 600 human casualties, billions of dollars in damage, and the demise of 1.3 million farm animals and over 1 billion marine animals in B.C. alone.

We need a response from all levels of government that is commensurate with the global crisis we now collectively face. Instead, despite some worthwhile initiatives, years of missed emission reduction targets and broken promises by the B.C. government risk locking our province into a high carbon future.

The Climate Change Accountability Act requires the government to publish annual reports on how it plans to make progress toward all its climate targets. The 2021 report falls woefully short, by failing to include a plan for the 2025, 2040 and 2050 climate targets. It also omits the government’s plan to cut carbon pollution from the oil and gas sector, which could rapidly grow in coming years—fueled largely by the B.C. government’s support for fracked gas and LNG projects.

Our provincial government must meet its commitments to protect us from worsening climate risks like catastrophic forest fires, atmospheric rivers, landslides and devastating heat domes. Without these plans, there is no way for British Columbians to trust their government is serious about taking adequate action to combat the climate crisis.

Tell your MLA that you expect better. Anything less than complete plans to reduce carbon pollution in every sector while meeting every target along the path to 2050 is unacceptable in the context of the climate emergency.

Your letter will be sent to your B.C. MLA and cc’d to B.C.’s Minister of Environment and Climate Change, George Heyman, and Premier David Eby.

Tell your MLA we need climate plans for every target and every sector before it’s too late! 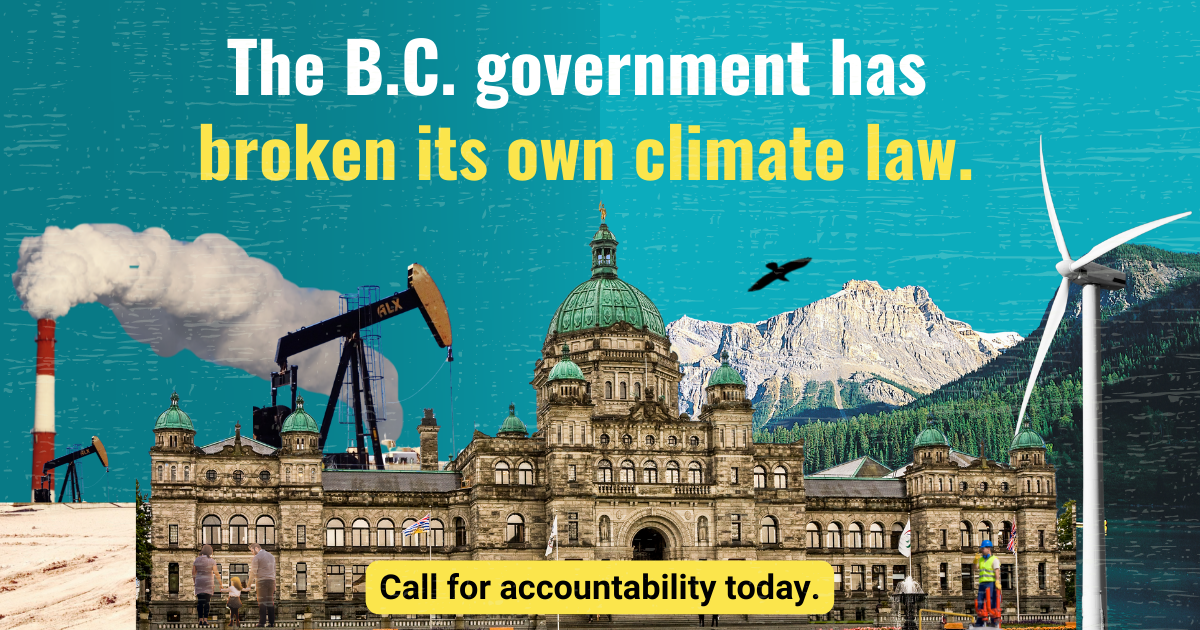