Call on B.C. to enact legal protection for bear dens

Protecting bear dens means defending habitat for species that depend on old-growth and healthy forests across B.C.

A century of logging old-growth forests has greatly reduced the availability of suitable bear dens across B.C., with research showing that black bears on Vancouver Island are some of the most affected. This is because black bears on Vancouver Island rely heavily on dens associated with standing and downed large-diameter trees that are most commonly found in intact forests.

Research has also found that dens in second-growth forests are decaying and will not be replaced because new logging is permitted long before the large-diameter trees suitable for dens have a chance to grow big enough to house a bear family.

The ongoing destruction of bear dens across many parts of the province is a dramatic example of how unbalanced our relationship with the non-human world is and the urgency of the biodiversity crisis in B.C., particularly for species that depend on intact forests. In 2020, former Premier John Horgan promised to implement all recommendations made by the Old Growth Review Panel, including to “declare conservation of ecosystem health and biodiversity of British Columbia’s forests as an overarching priority and enact legislation that legally establishes this priority for all sectors.”

Province-wide regulation that protects bear dens can be rolled out immediately as work with Indigenous Nations to protect all at-risk ecosystems and endangered species habitats continues.

As culturally sacred and critical keystone species, a decline in bear populations would negatively impact other species and contribute to the ecological degradation of old-growth ecosystems. Bear den sites are nurseries – a safe place to give birth and survive the winter.

Help us call on the B.C. government to formally protect black bear and grizzly bear dens and ensure viable habitat is available for a healthy bear population across the province. Protecting their home means defending habitat for species that depend on old-growth and healthy forests across B.C.

By adding your voice, you will be joining environmental groups, First Nations and members of the tourism sector. Your letter will be sent to B.C.’s Minister of Water, Land and Resource Stewardship, Nathan Cullen; Minister for Forests, Bruce Ralston; the Minister of Environment and Climate Change Strategy, George Heyman; Premier David Eby and your MLA.

Call on the B.C. government to enact legal protection for bear dens now! 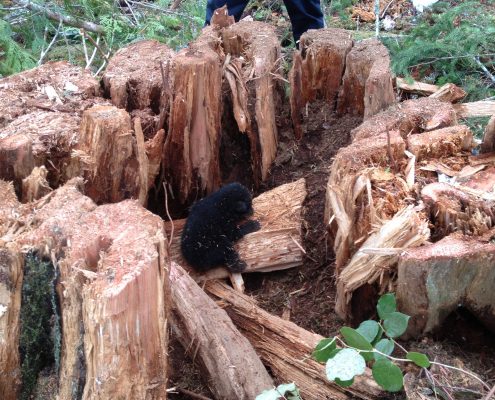 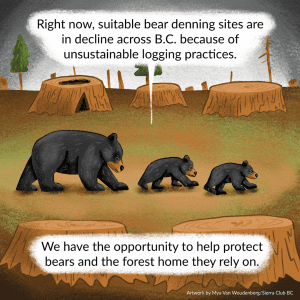 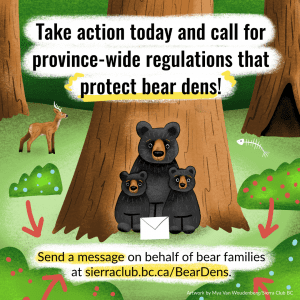