After 13+ years with Sierra Club BC, Campaigns Director Caitlyn Vernon is moving on, but not before penning a heartfelt farewell love letter.

END_OF_DOCUMENT_TOKEN_TO_BE_REPLACED

The ‘Intact Forests, Safe Communities’ report’s message is resonating across the province with over 100 mainstream media stories published since its release.

END_OF_DOCUMENT_TOKEN_TO_BE_REPLACED

As we wrap up a very unusual year, we’re looking back at our favourite podcasts from 2020 (and a couple from previous years that we still enjoy).

END_OF_DOCUMENT_TOKEN_TO_BE_REPLACED

As we experience the climate emergency, find out why it’s so important to protect old-growth forests today!

END_OF_DOCUMENT_TOKEN_TO_BE_REPLACED 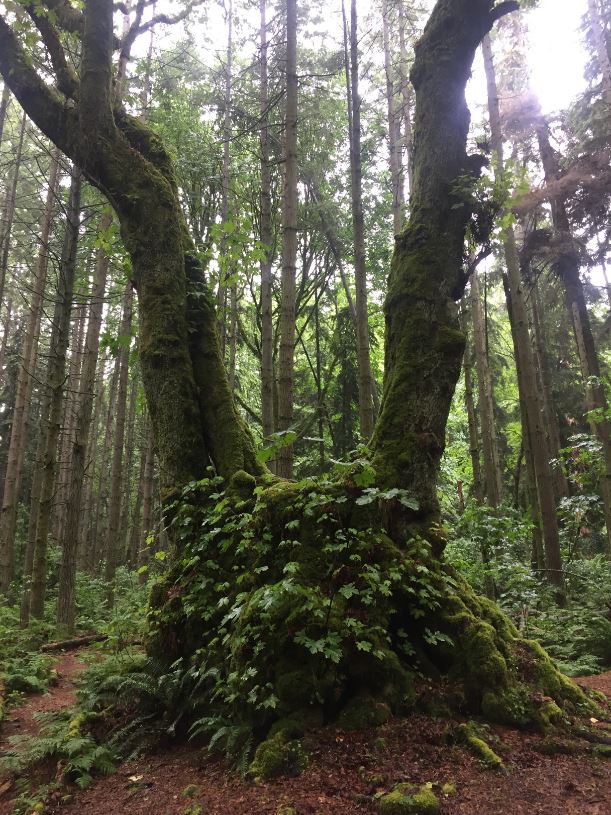 I stood on the banks of the Ksi Sii Aks (Tseax River), just outside of Gitlaxt’aamiks in the Nass Valley, and looked up. Clouds of cotton swirled around me, cast off by black cottonwoods in high summer. I’d come to Nisga’a territory in northwestern BC to find the largest black cottonwood in the province. I had GPS coordinates for the tree, but I now had to rely on my senses—and measuring tape—to determine which of the trees in the surrounding groves was the largest.

I’m a big tree tracker. Since June 2018, I have been looking for the largest trees in BC—the Champion Trees—and recording these visits on my blog, Tracking Giants. These Champions have been nominated and verified as the largest of their species, and are recorded in the BC Big Tree Registry. The registry was the idea of famed big-tree tracker and mountaineer Randy Stoltmann, and the BC Forestry Association established it in 1986. The registry was revitalized in 2009, and is now maintained by UBC’s Faculty of Forestry. 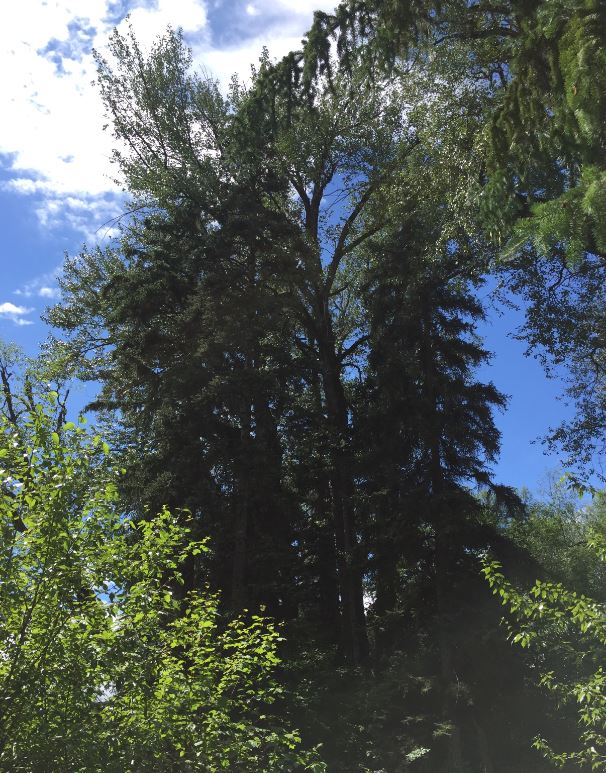 I use guidebooks to determine the tree’s species, and clues that may be from the early 1990s (as well as tips from fellow trackers) to determine if it is in fact the Champion. Once I determine the tree’s status, I take new measurements and photos, and assess its general health. Some of these trees may have fallen, been cut down, or been hit by lightning—they are not physically marked or protected, and there’s no guarantee that they will be there when I arrive. My project is thus about recalibrating ambitions and being comfortable with shifting goal posts—necessary when the goal posts might be missing, or when a newly discovered giant could supplant the existing Champion at any point.

I’m visiting and chronicling trees of all types, from Western red cedars and Douglas-firs to maples, crabapples, larches, and willows. These trees are located all around BC, from the Southwest Coast to Haida Gwaii, Fort Nelson, and the Kootenays. The trees change dramatically—in type, size, and distribution—because of the mountain ranges and the weather systems that roll in off the Pacific and down from the Arctic. I’m learning about numerous species, beyond the cedars and firs I know so well, and have had to shift my understanding of what a “typical BC tree” looks like.

Some of these trees are 800–1,000 years old. They’ve survived logging, encroaching development, fire, even blight. It feels appropriate to pay homage, and for these reasons I regard my trips around the province as pilgrimage, and myself as a tree pilgrim. 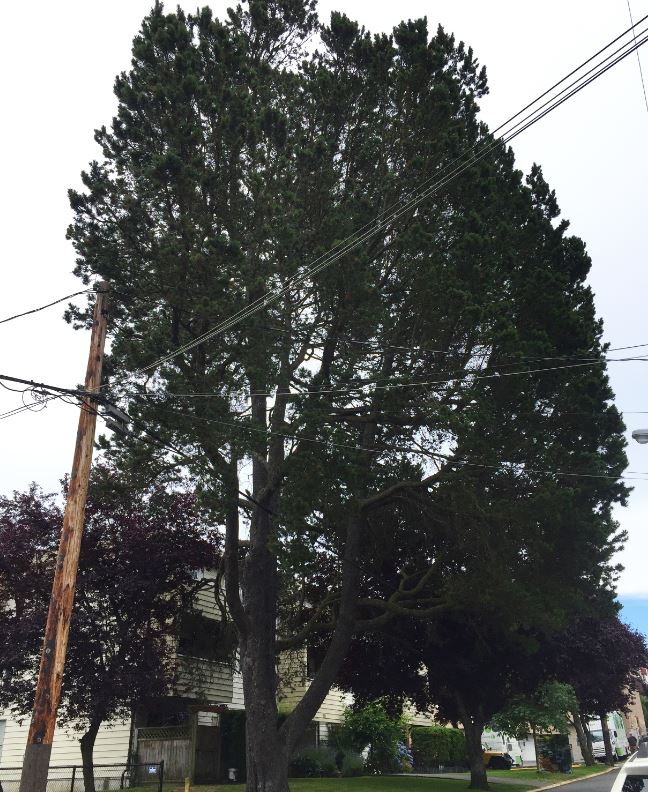 Though we shouldn’t think of these Champions as white rhinos, the fact is that some of these large trees are now ecologically anomalous: prior to the Anthropocene, they would have been the norm. We’re potentially among the last generations to experience these giants, in a world that is rapidly diminishing in diversity and livability. As the 2019 Patagonia documentary Treeline comments, “As the climate changes, it is increasingly unlikely that these complex ecosystems will return after logging, even if they are allowed the 250–1,000 years they need to regenerate.” We have a small window of time in which to act, and it’s crucial to honour and conserve what’s here now.

It stands to reason that some of the largest trees haven’t yet been found, which is one reason why I support the work of conservation groups like Sierra Club BC and the Ancient Forest Alliance. For example, the recently discovered Mossome Grove on Vancouver Island contains a Sitka spruce that is likely among the top 10 largest in the province. This 13-hectare grove, which includes a maple with a 23.1 m long horizontal branch, is currently unprotected. While no logging is planned, the Ancient Forest Alliance is calling on the provincial government to protect the grove by expanding the 2-hectare old-growth management area into the woodlot managed by Pacheedaht Forestry Ltd. 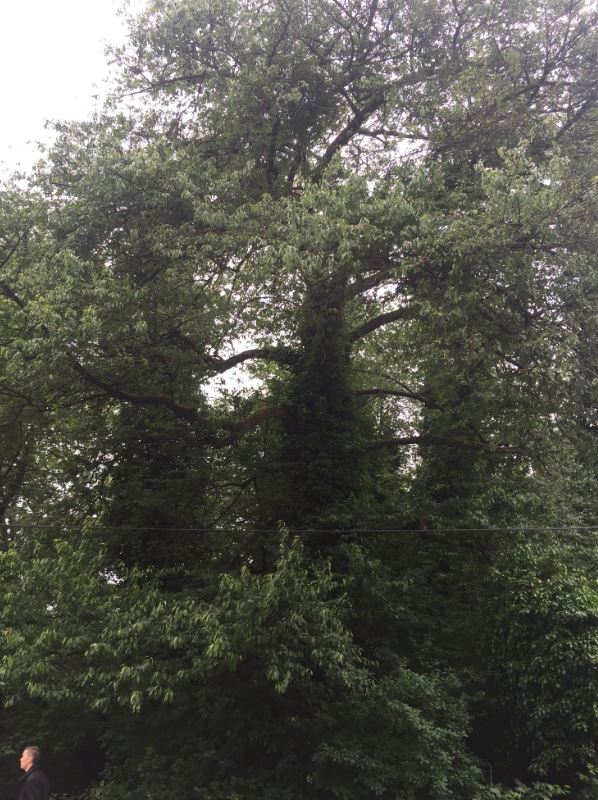 As for that black cottonwood? I found it on the riverbank, and you can see it, too, by searching for its coordinates on the BC Big Tree Registry and travelling to the incredible Nass Valley. The coming months are a perfect time to visit these trees—some of them are deep in the backcountry or down logging roads, but a lot are closer than you think. The largest known bigleaf maple, for example, is in Vancouver’s Stanley Park. When you look for a tree, know whose territory you’re visiting (Native Land [[www.native-land.ca]] is a good starting point), and take care that you’re not trespassing on restricted or culturally sensitive lands. Follow protocols, and above all be safe and respectful. Happy big-tree hunting!

Amanda Lewis is a book editor and novice big-tree tracker. She lives in Vancouver, BC, unceded territories of the the xwməθkwəy̓əm (Musqueam), Skwxwú7mesh (Squamish), Stó:lō, and Səl̓ílwətaʔ/Selilwitulh (Tsleil-Waututh) Nations.  All images by Amanda Lewis. Follow her stories and find remarkable photos of Champion Trees at TrackingGiants.com and on her Instagram page at @trackinggiants