END_OF_DOCUMENT_TOKEN_TO_BE_REPLACED

Last spring was Emily’s first time on a front line as she joined the movement to stop the Trans Mountain pipeline expansion.

Moments of connection with people Emily met at the Watch House in Burnaby have stuck with her, even with people she only knew for a few minutes. This is a comic about some of those moments, as we might be entering another construction season.

END_OF_DOCUMENT_TOKEN_TO_BE_REPLACED

The federal government finally announced that we are in a climate emergency. The next day, they approved the Trans Mountain tarsands pipeline expansion.

END_OF_DOCUMENT_TOKEN_TO_BE_REPLACED

After turning a blind eye to the climate change impacts of Trans Mountain, the National Energy Board made a remarkable admission about the impacts of TMX on endangered southern resident orcas in its Reconsideration Report released February 22. 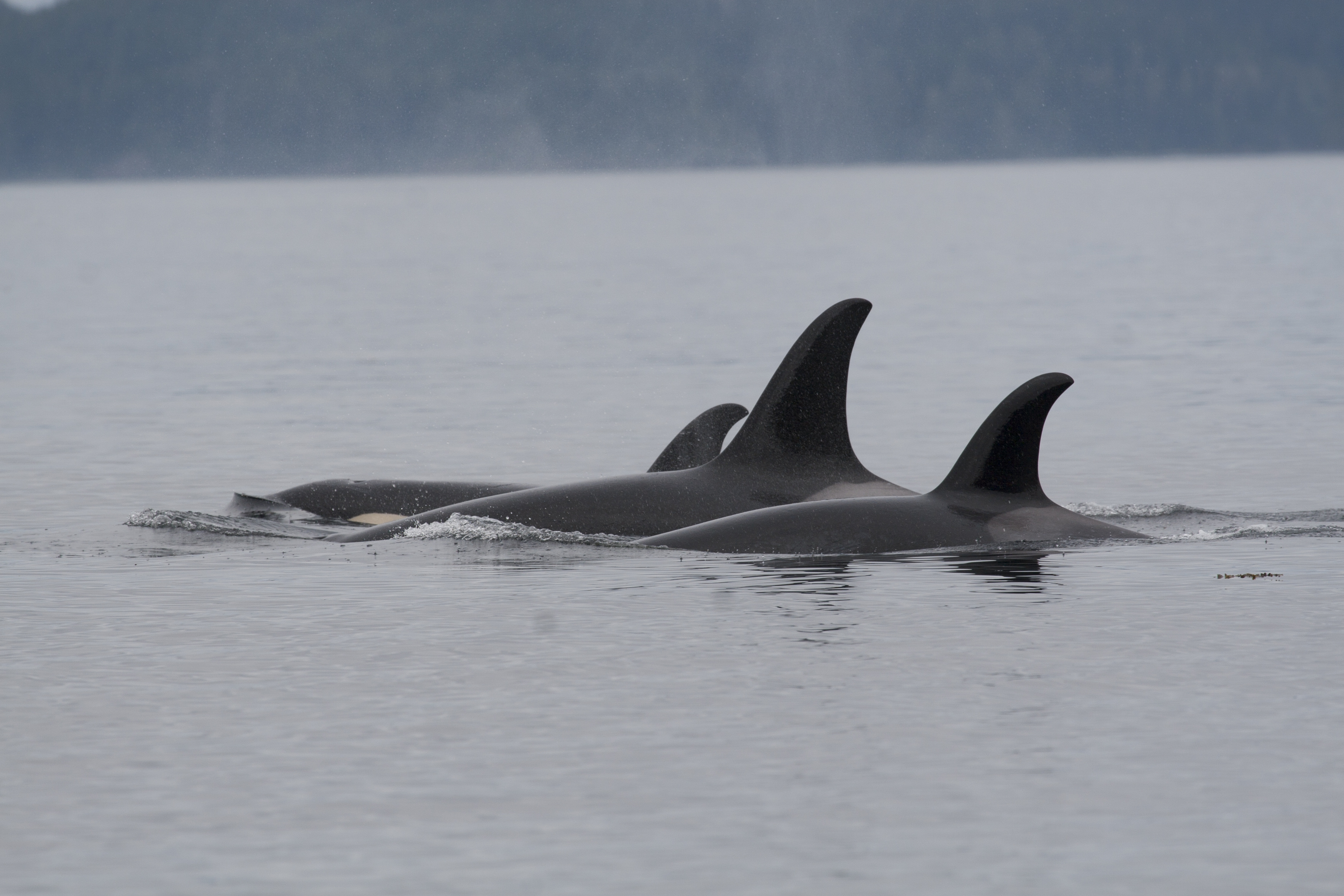 In short, just like in their original review of the project three years ago, the NEB admitted that the project’s oil tankers would have “significant adverse effects” on the orcas, but that they decided expanding a tar sands pipeline was more important.

Yes, you are understanding that right – the National Energy Board thinks pipelines are more important than the potential extinction of orcas.

This round of review was so problematic, inadequately scoped, rushed, and inherently compromised by the obvious bias of the federal government that it has set itself up for inevitable legal appeals.

At the same time this half-baked attempt at public review has attempted to give Trans Mountain a second rubber stamp, the SNC-Lavalin corruption scandal has broken Trudeau’s cabinet into pieces.

And guess who the federal government appointed as the special envoy for discussions with First Nations regarding the pipeline? None other than the lawyer for SNC-Lavalin, Frank Iacobucci.

Would you trust SNC-Lavalin’s lawyer to handle consultation with First Nations for the federal government while the government is pushing hard for a tar sands pipeline?

That’s how I feel too.

You can almost hear the Kinder Morgan executives laughing from Texas.

On the near horizon are the constitutional challenges and referrals in the provincial tit-for-tat game between Alberta and BC.

The outstanding question is this: does a province have the constitutional right to regulate and limit certain substances that are harmful to human health and the environment if this creates implications for the economic prospects of another province?

The BC government has filed a reference case in BC Supreme Court to answer the question of whether the government can limit the transportation of dangerous substances like diluted bitumen across the province. BC’s reference case begins March 18 and could yield a ruling anytime this spring or summer. 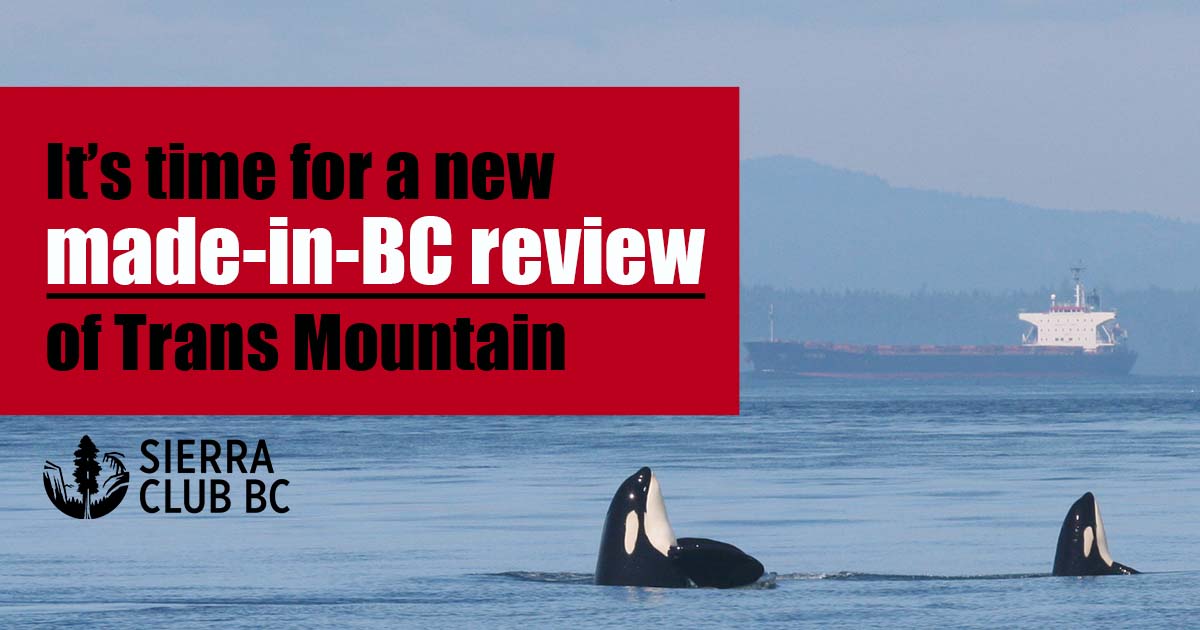 But in a desperate attempt to protect the tar sands industry, the Alberta government has retaliated by bringing in legislation that could limit fuel exports to BC. While BC has already attempted to challenge this legislation, a Calgary court has ruled that the legislation can only be challenged if and when it is enforced. Should Alberta enact limitations on fuel exports to BC, this would likely be unconstitutional.

Curiously, however – in a move that contradicts its public stance against Trans Mountain – the BC government is actually fighting the Squamish Nation in court to uphold BC’s Environmental Assessment Certificate and Equivalency Agreement with the NEB. This is despite the project’s approval being quashed in court last year after the original NEB report was found to be too deeply flawed.

So, while Premier Horgan is throwing high-fives with Washington State Governor Jay Inslee and together stating publicly they are opposed to TMX, behind courtroom doors they are defending the provincial certificates granted to Trans Mountain during the Christy Clark era.

In short, the government is leaning on their public communications to garner support and influence popular opinion, but they aren’t using all the tools in their toolbox to fight this pipeline.

That’s why—while we stand ready for another possible round of Pull Together to support Indigenous legal challenges—we’re asking the BC government to stop fighting the Squamish Nation and re-do an environmental review of the project under a new process the public can trust.  And we ask you to do the same.

You helped stop the Trans Mountain pipeline and tankers in the courts!

On August 30, we celebrated a major victory as the project’s approval was quashed by the Federal Court of Appeal. This court ruling is fantastic news for orca whales, for our climate, for Indigenous peoples defending their title and rights, and for the rights of all of us to defend the land and waters we love and call home. 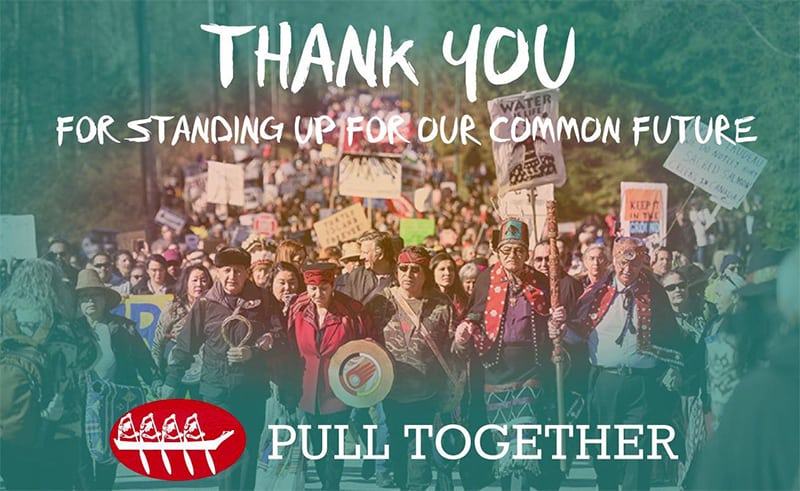 And it happened in part thanks to the help of hundreds of people who stepped up in solidarity with First Nations by supporting our Pull Together campaign. With your help, we raised more than $650,000 for the nations fighting this project in court!

Take a moment to pat yourself on the back. First, we sent Kinder Morgan home to Texas, because the company knew this project was a sinking ship. Now, with your support, Indigenous peoples fought back – and won.

The court agreed with what we’ve been saying all along: that the National Energy Board review was deeply flawed and fell far short of the mark in consulting Indigenous peoples.

The fact that the NEB decided not to include in its review the impacts of marine tanker traffic– which it agreed would pose significant adverse effects to endangered orca whales – meant the government could not rely on the Board’s recommendation in making a decision. And because Canada failed to engage meaningfully with Indigenous peoples, the court ruled this consultation needs to be redone.

This is a stunning blow. And it offers the perfect opportunity for Prime Minister Trudeau to walk away from this pipeline and tankers.

But instead, he’s already doubled down his efforts to push this dangerous project through communities that do not consent.

Trudeau has asked the NEB to reconsider its recommendations – and he’s given it an incredibly tight 22-week timeline to do so.

To make matters worse, this hasty new review is already showing signs of the same flaws that were present in the original review. On September 26, the NEB announced the new review.

We did some digging and found out the NEB was misinforming people about this process.

We found that their website contained inaccurate and conflicting information, leading many people to believe that the deadline for comments on the project was October 3 – less than a week away. It also suggested people need to send in an application to participate and prove that they are “directly affected” or have “relevant information or expertise,” just like the first NEB review process in 2014, which was designed to shut people out of the process.

After we pestered them all day, the NEB finally updated their website to correct the wrong info. 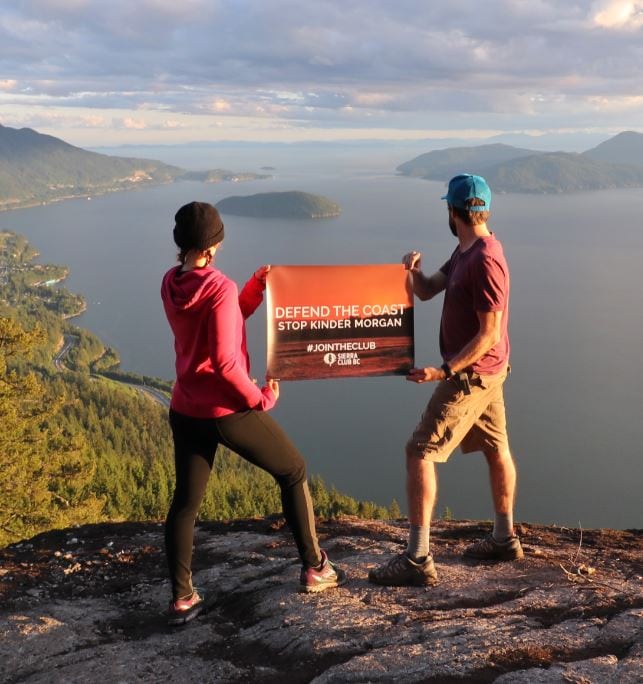 It doesn’t look like the NEB has learned much from their past mistakes. Instead, it looks like they’re up to their old tricks and that we’ve got another sham process on our hands – a process destined for another predetermined outcome.

This is what happens when you do a rush job. We see no difference yet between this and Harper’s approach – they’re still trying to confuse people and deny participation.

Get a refresher on the flaws of the last NEB review with our “Credibility Crisis” report: https://bit.ly/2H6zm60

If the Trudeau government takes its commitment to reconciliation and the United Nations Declaration on the Rights of Indigenous Peoples seriously, then these rigged and superficial approaches need to become a thing of the past. Indigenous peoples have the right to free prior and informed consent – and they still do not consent.

It’s time for a more modern, democratic process that involves much closer scrutiny, especially of the many environmental, social and economic dangers posed by projects like this.

We are thrilled that the courts have overturned federal approval of this dangerous pipeline and tankers project that would have put so much at risk. But the fight is far from over.

We’ll be helping people ensure they are heard in this new process, and keeping a sharp eye on the NEB to ensure they don’t keep pulling more tricks. It’s still important to use this opportunity to raise your voice, and we hope you’ll participate by sending a letter of comment. Once more details are released on the process, we’ll be in touch about how you can have your say.

Say yes to orcas and salmon – donate now to help us keep fighting this pipeline and oil tankers.