“Today’s decision is disappointing. The courts have let the province off the hook when it comes to respect for Indigenous rights.

“The National Energy Board review of Kinder Morgan’s pipeline and tanker project was widely criticized for failures in process, limiting of participation, lack of accountability, inadequate consultation with First Nations, and failure to evaluate the project with regard to Canada’s domestic and international commitments to climate action. The previous B.C. government used this discredited process as the basis for their approval.

“It is extremely unfortunate that the current provincial government chose to defend the previous government’s approach to Indigenous consultation in this case.

“The current B.C. and Canadian governments have committed to implementing the UN Declaration on the Rights of Indigenous Peoples. This court ruling represents the bottom of the barrel in terms of an effort to engage in a meaningful way with Indigenous rights.

“The Squamish Nation has 30 days to decide whether to appeal today’s decision. Sierra Club BC stands firmly behind the Nation’s continued fight for their rights and their home.”

Sierra Club BC released the following statement from conservation and climate campaigner Mark Worthing in response to the federal government’s announcement that it will indemnify Kinder Morgan against risks involved in building the Trans Mountain Pipeline:

“The federal government is trying to create the illusion that the BC government is the sole cause of investor uncertainty, which is completely false.

“In doing so, the reality of Indigenous rights and title have been erased from discussion. This is cynical politics of the highest order and appears to be setting up BC taxpayers to bear the financial brunt of any potential NAFTA complaint that may be brought by Kinder Morgan.

“Reconciliation with Indigenous peoples, the United Nations Declaration on the Rights of Indigenous Peoples and the recommendations of the Truth and Reconciliation Commission have been cast aside.

“A promise to reduce fossil fuel subsidies has been turned on its head, with what amounts to a massive subsidy to Kinder Morgan.

“The Canadian government’s announcement to indemnify a risky fossil fuel project is akin to playing poker with the public pocket book. This move is a slap in the face to Canadians and marks a new low in the dark marriage between corporations and the state.

“Trudeau may think writing a blank cheque to Kinder Morgan will eliminate the political risk for investors, but many other risks remain, foremost among them Indigenous opposition.

“People-powered, Indigenous-led resistance in the courts, in the streets and on the land will continue to grow stronger the more Ottawa tries to ram this pipeline and tanker project through.”

VANCOUVER—Leadnow, Sierra Club BC, SumOfUs.org and the Wilderness Committee will begin running radio ads Friday urging British Columbians to call their MPs to express their opposition to using public funds to bail out the Kinder Morgan pipeline and tanker project.

“The Canadian Association of Petroleum Producers and the Alberta and federal governments have mobilized a massive, coordinated propaganda campaign to promote Kinder Morgan’s pipeline and tankers project,” said Mark Worthing, conservation and climate campaigner with Sierra Club BC. “Finance minister Bill Morneau confirmed today that the federal government is full steam ahead on a Kinder Morgan bailout, but no matter how much public money they throw at Kinder Morgan, B.C.’s opposition to this pipeline remains firm and will not bend.”

Alberta recently launched a $1.2 million ad campaign, $700,000 of which will be spent in B.C. alone. The federal government is actively negotiating a bailout package that could cost taxpayers as much as $10 billion. No one knows how much CAPP is spending, but they are known as one of the most well-financed, powerful lobbying organizations in the country.

The ads are funded with individual donations from concerned Canadian residents. The ads will run from May 18 to 28 on Virgin Radio 94.5 FM.

“Prime Minister Trudeau wants to use billions of taxpayer dollars to bail out a foreign oil corporation’s ill-conceived pipeline project,” said Peter McCartney, climate campaigner with Wilderness Committee. “Not only are British Columbians asked to take on the risk of a spill, but now he actually expects Canadians to cover Kinder Morgan’s losses when this proposal goes belly-up?”

“Trudeau needs to get his priorities straight. Taxpayer dollars should pay for schools and hospitals, not handouts to big oil. Indigenous rights should come before corporate profits,” said Jolan Bailey, a climate campaigner with Leadnow.

“Liberal MPs in B.C. are already worrying about how many votes they’ll lose if Trudeau follows through on his reckless bailout plan. With Kinder Morgan’s hardball ultimatum to the federal government fast-approaching, MPs need to hear loud and clear from British Columbians that they do not support any bailout of Kinder Morgan, or any other company,” said Emma Pullman, campaign manager at SumOfUs.org.

Sierra Club BC released the following statement from conservation and climate campaigner Mark Worthing in response to today’s announcement from the B.C. government:

“We welcome today’s announcement of public comment on proposed provincial regulations for oil spill response. It is heartening to see the B.C. government modernizing our environment and public health regulations, and standing up for B.C.’s coast and rivers.

“It’s shocking that B.C. does not have similar regulations in place already, and that big oil corporations have been allowed to operate with relative impunity. With these proposed regulations, the B.C. government is seeking to bring our province up to par with safety and preparedness measures that our neighbors in Alaska and Washington have had in place for decades.

“No longer will B.C. be applying regulations from the previous century to today’s oil transport technology. The days of turning a blind eye are over. The B.C. government is standing together with B.C. residents and First Nations to protect these lands and waters, and all the jobs that would be lost in an oil spill.

“However, even with new regulations in place, no approach will be able to fully clean up a major spill. Spills are inevitable and the only way to avoid an increase in spills is to avoid expanding the shipping of fossil fuels.

“We will be encouraging British Columbians to engage in the government’s public consultation process and calling on the B.C. government to set the highest bar possible, so that B.C. is a responsible, healthy, safe place to live and do business, and no longer a wild west for big corporations transporting dangerous goods.” 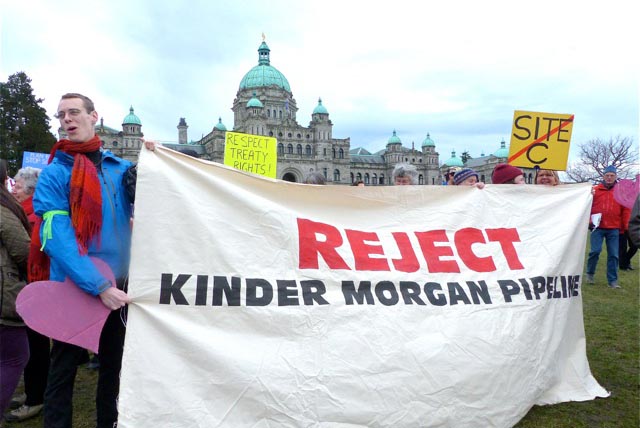