Sierra Club BC offers the following statement following the B.C. government’s response to SCBC’s legal challenge over its climate plan.

The B.C. government has responded to Sierra Club BC’s climate accountability lawsuit we filed with the help of charity law firm Ecojustice. Sadly, instead of accepting responsibility and beginning the urgent work to address the blind spots we have identified, the province is alleging that we are going to court just to get the plans we want. The reality, however, is that several plans for key climate targets laid out in B.C.’s 2019 law simply don’t exist in the province’s 2021 accountability report.

We’re holding them to account in accordance with the letter of the law, as it’s written. There is no doubt from our perspective that B.C.’s climate accountability legislation requires the government to publish plans to make progress towards all of B.C.’s climate targets, but they have failed to produce these plans for 2025, 2040 and 2050. Also non-existent is the crucial plan for the oil and gas industry that shows how B.C. can possibly meet its ambitious 2030 target for this sector, while at the same time continuing to support and subsidize new LNG terminals and more fracking (for more background see our March 31 media release here).

The B.C. government argues that the public cannot hold them accountable in the courts if they fail to meet the requirements of their climate accountability law. But laws written by governments in Canada are routinely subject to public scrutiny in the courts. It’s a cornerstone of our democracy and the rule of law that the public should access the judicial system to demand fairness, transparency, and accountability. Why would B.C.’s climate legislation not be subject to scrutiny by the public through the courts? The disappointing response from the province shows the importance of the courts in ensuring climate accountability. 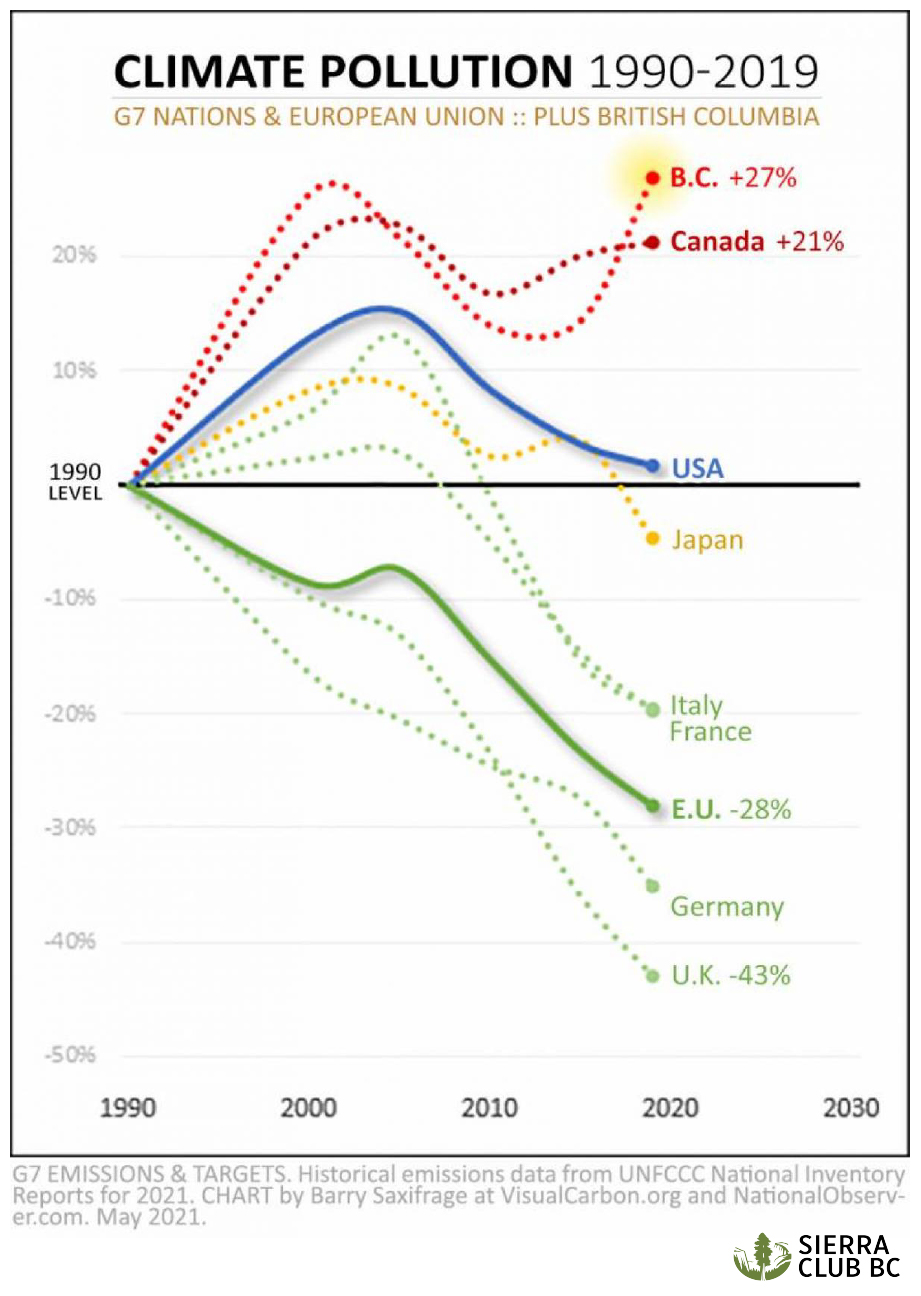 The latest IPCC reports showed unequivocally that time is running out to avert the worst impacts of the climate crisis, that further global warming can only be stopped once we have achieved net zero emissions, and pollution must be cut as quickly as possible. We are calling on the B.C. government to come forward with a plan for every target and every sector of the economy, including oil and gas.

We are in a climate emergency and it’s not too late for the B.C. government to deliver on their promise and address the crucial blind spots. Stay tuned as we continue to report updates on the progress of this lawsuit. 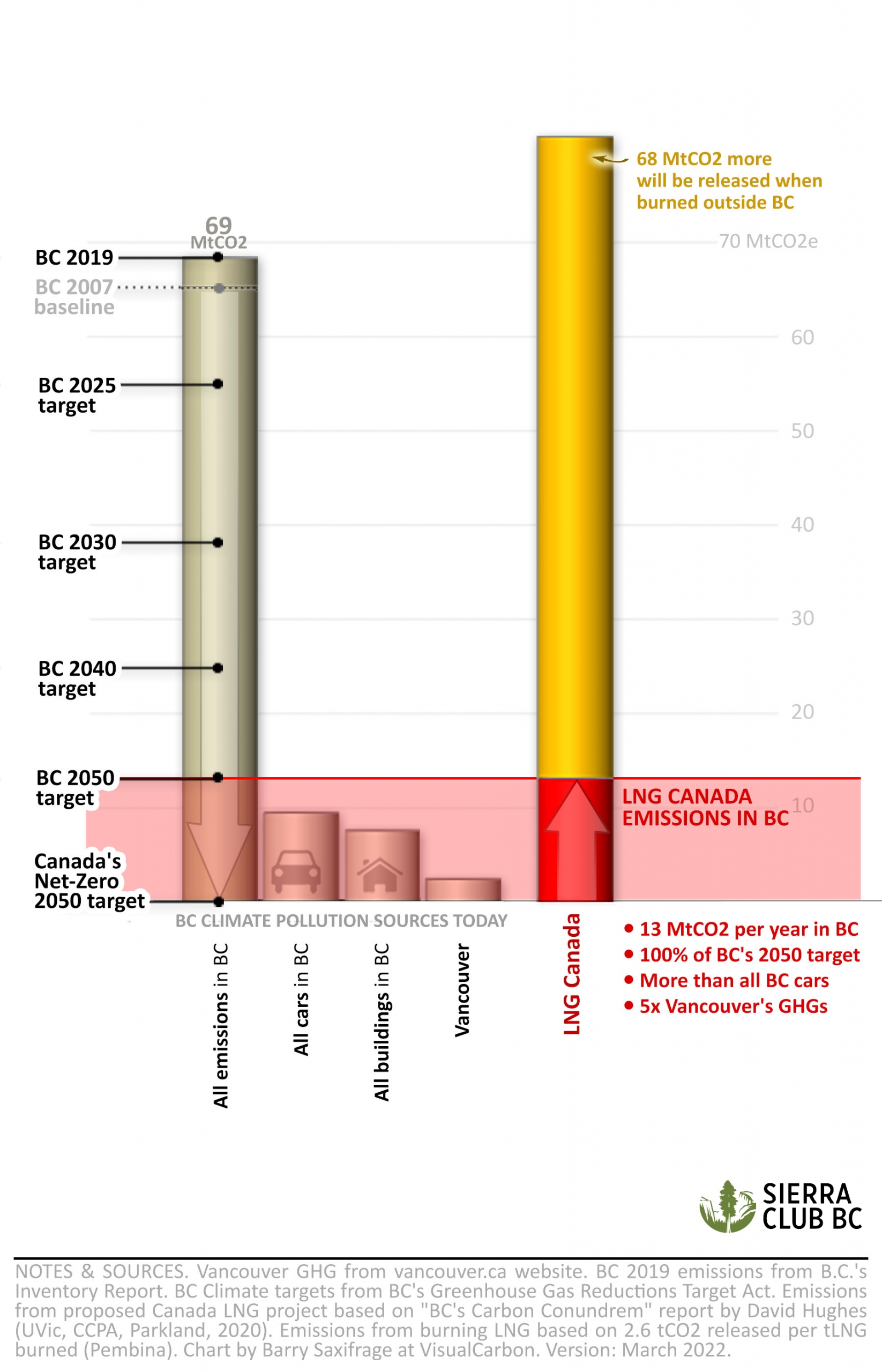 For more information on why Sierra Club BC and Ecojustice are going to court over blind spots in B.C.’s climate plans go to our joint March 2022 media release:
https://sierraclub.bc.ca/environmental-groups-sue-b-c-government-over-missing-in-action-climate-plans/

Read more about the provincial response in this article: https://www.vancouverisawesome.com/highlights/bcs-climate-laws-should-not-be-overseen-by-courts-claim-court-documents-5322790

Sierra Club BC’s Senior Forest and Climate Campaigner and Science Advisor Jens Wieting is available to comment on key findings of today’s Intergovernmental Panel on Climate Change (IPCC) report and why Sierra Club BC and Ecojustice are taking the B.C. government to court over missing action plans for several critical targets required by law in B.C.’s climate accountability report.

The third part of the 6th IPCC assessment report is of particular importance because it offers more detail on what actions all parts of the world, particularly the richest countries and biggest polluters, have to take to address the climate crisis, with a particular focus on reductions needed by 2030.

UN Secretary-General António Guterres said about the report “The jury has reached a verdict. And it is damning. This report of the Intergovernmental Panel on Climate Change is a litany of broken climate promises. It is a file of shame, cataloguing the empty pledges that put us firmly on track towards an unlivable world. We are on a fast track to climate disaster.”

Key findings include that global emissions must peak before 2025 and be reduced by 43 percent by 2030 if we are to have a chance of keeping warming below 1.5 degrees, the threshold considered crucial to maintaining a livable climate.

Canada is among the top ten polluters and like Canada, B.C. has failed to meet emission reduction targets for over a decade. The province’s emissions have increased every year during the last five years data is available for (2015-2019) and have remained higher than 2007 levels, B.C.’s baseline year.

The B.C. government claims to have a “continent leading CleanBC plan” but it continues to support and subsidize the expansion of fracking wells and new LNG terminals. Once built, the full emissions enabled by the LNG Canada terminal in Kitimat alone would make it nearly impossible to meet B.C. targets.

For more information on why Sierra Club BC and Ecojustice are going to court over blind spots in B.C.’s climate plans last week go to our joint media release: https://sierraclub.bc.ca/environmental-groups-sue-b-c-government-over-missing-in-action-climate-plans/

“Today’s IPCC report (the latest in a three-part series) shows that close to half of the world’s population is already exposed to increasingly dangerous climate impacts and that any further delay in concerted global action will miss a brief and rapidly closing window to secure a liveable future.

“Today’s report shows that even with multiple crises in the world, our governments can’t afford to lose sight of how little time remains before large swaths of the planet will become uninhabitable. We have waited too long and continued delays are irresponsible as deadly climate impacts are only escalating. Canada is among the top ten global polluters and like Canada, British Columbia has failed to meet emission reduction targets for over a decade. There are few regions on the planet that can do more than Canada and British Columbia to rapidly reduce emissions.

“B.C.’s emissions have increased every year during the last five years data is available for (2015-2019) and remain higher than in 2007, the baseline year chosen by the province. Despite the climate emergency, the B.C. government continues to support and subsidize the expansion of fracking operations and construction of the LNG Canada terminal in Kitimat. Unless stopped, this project will drastically increase emissions in 2025, the same year B.C. emissions are supposed to be 16 percent lower than in 2007. LNG Canada and other proposed LNG terminals would almost certainly make it impossible to meet 2030, 2040 and 2050 targets.

“The new IPCC report emphasizes the untapped potential of nature to reduce some climate risks, slow down climate change and improve peoples’ lives and livelihoods. The scientists found that safeguarding the resilience of biodiversity and ecosystem services depends on effective conservation of approximately 30 to 50 percent of Earth’s land, freshwater and ocean areas.

“While Canada has committed to increasing protection of lands and waters to 30 percent by 2030 and billions of dollars in funding to achieve this goal, the B.C. government has not developed any plan or committed any funding to increase the amount of permanently protected areas in the province. 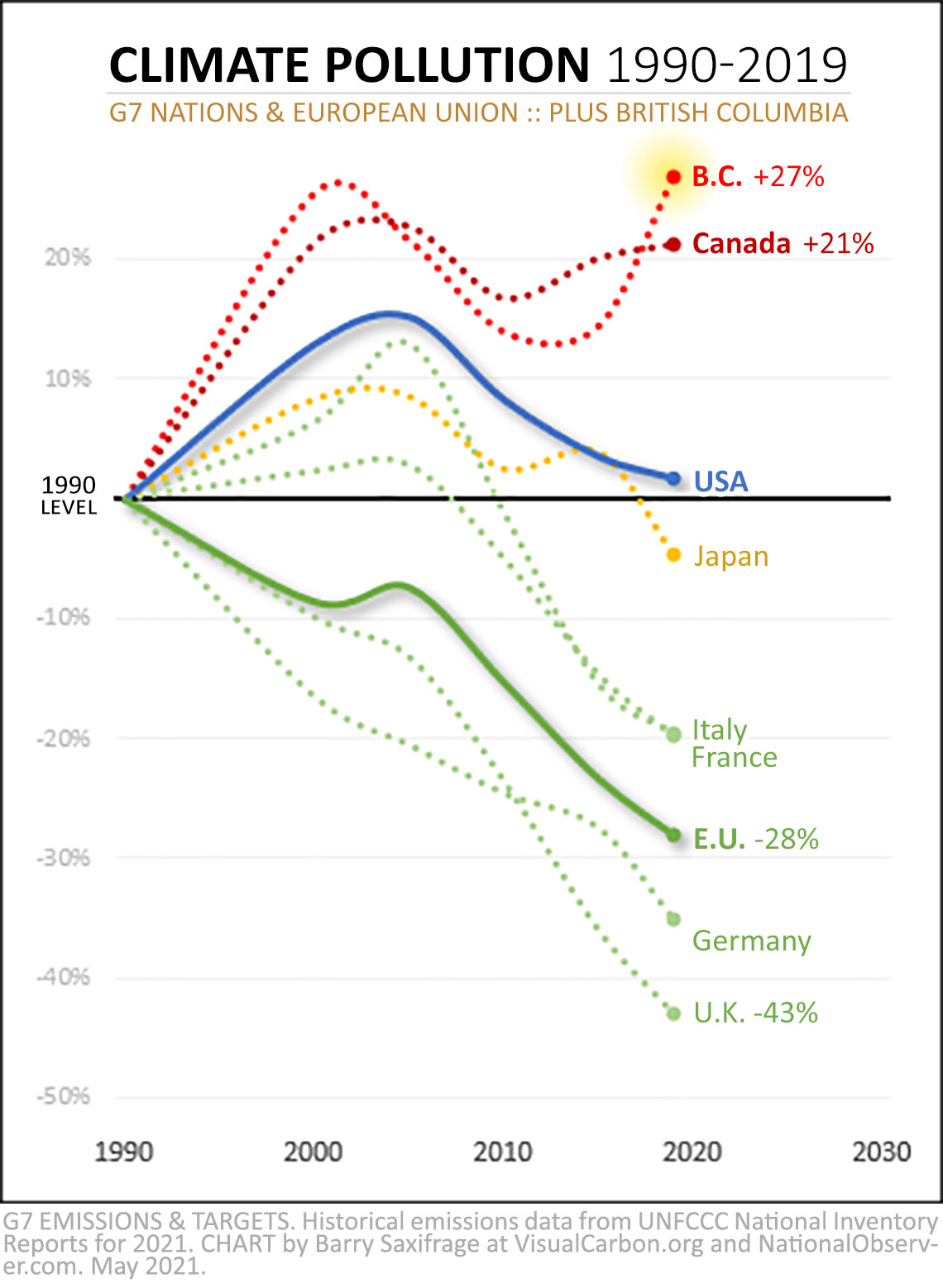