Sierra Club BC Senior Forest and Climate Campaigner Jens Wieting offers the following brief statement in response to today’s announcements on updates to forestry in B.C.

“Today’s announcement was an Orwellian nightmare. The outrageous claims by Premier John Horgan about how much old-growth is already protected and the extent of old-growth protections enacted during his government is quickly destroying any and all remaining trust that his government is sincere about its promise to protect at-risk forests before it’s too late.

“Preparing to redistribute forest tenure without first taking action to ensure that the most endangered old-growth forests have at least interim protection will only make it harder to save any of these forests later. It’s continued talk-and log. People in B.C. who care about the web of life should be deeply worried about this government’s ongoing denial of the severity of the old-growth and biodiversity crisis.

“This government received a blueprint for solutions over a year ago, independent experts mapped the most endangered old-growth forests across the province for them, the federal government committed $2.3billion dollars to increase protected areas across Canada and yet, old-growth logging continues unabated and almost all at-risk forests remain without interim protection.

“The old-growth crisis calls for immediate short-term funding for First Nations and forestry workers seeking an alternative to logging the last old-growth. Defending business as usual will only exacerbate conflicts like the one happening over Fairy Creek and undermine options for communities seeking an alternative to destructive resource extraction.”

An independent scientists’ report released today—B.C.’s Old-Growth Forest: A Last Stand for Biodiversity—shows in detail how shockingly little is left of B.C.’s most endangered old-growth forests, in particular those with very big trees. Of the little that remains, only a small fraction is protected from logging.

“This report shows that things are worse than we thought for B.C.’s ancient giants,” said Jens Wieting, Sierra Club BC’s forest and climate campaigner. “These big old and ancient trees existed for thousands of years and 100 years of industrial logging has cut all but three percent. Every natural system has a breaking point and we have reached it.”

Sierra Club BC supports the report authors in calling on the B.C. government to ‘stop the bleed’ and ‘immediately place a moratorium on logging in ecosystems and landscapes with very little old forest.’

“Only about 35,000 hectares of old-growth forests with very big old trees remain across the province, and only a portion have effective protection. We are losing a legacy and all the environmental services that these forests provide for community and human health,” said Wieting. “It is unconscionable that the last remaining big old trees are still being logged as a result of what the report authors call ‘loopholes, gaming, arithmetic errors and simple lack of monitoring.’”

The authors also found that many old-growth management areas, created to protect old-growth forests, do not actually contain old forest.

“In B.C. we have these globally unique old-growth forest ecosystems and our analysis shows they are almost at their endpoint,” said Dr. Rachel Holt, one of the scientists who wrote the report together with Dr. Karen Price and Dave Daust. “We wrote this report under our own steam because government information was either misleading or not making it out to the public. The current management approach utterly fails to protect the ecological health of productive old-growth. We need to change our approach and manage for resilience—for communities, jobs and ecosystems—and not wait to transition until the last big old trees are gone”

“These scientists have painted a stark picture and the fate of these big ancient trees is in our hands. The B.C. government has the opportunity to make conservation and environmental restoration a cornerstone of the COVID-19 economic recovery with a vision for healthy communities, healthy ecosystems and preventing future disasters,” said Wieting. “Investing in forest conservation and improved forestry will create long-term jobs, support the health and wellbeing of B.C. residents, and defend our communities from climate impacts like flooding and drought. This can be accomplished through support for Indigenous-led conservation solutions, ecosystem restoration, investments in government stewardship and a shift to ecoforestry.”

The provincial government has opportunities to protect old-growth forests through COVID-19 economic recovery initiatives, logging moratoria, the creation of new protected areas, and amendments to provincial forestry laws and regulations that restore the ecological integrity of B.C.’s forests and close loopholes. Old-growth forests can also be protected by enacting a science-based old-growth strategy in response to the provincial old-growth panel review and implementing an endangered species act.

With wildfires and floods raging around the world, it is clear that we need bold climate action. Learn why forests are our best climate ally and how you can stand up for old-growth today.

END_OF_DOCUMENT_TOKEN_TO_BE_REPLACED 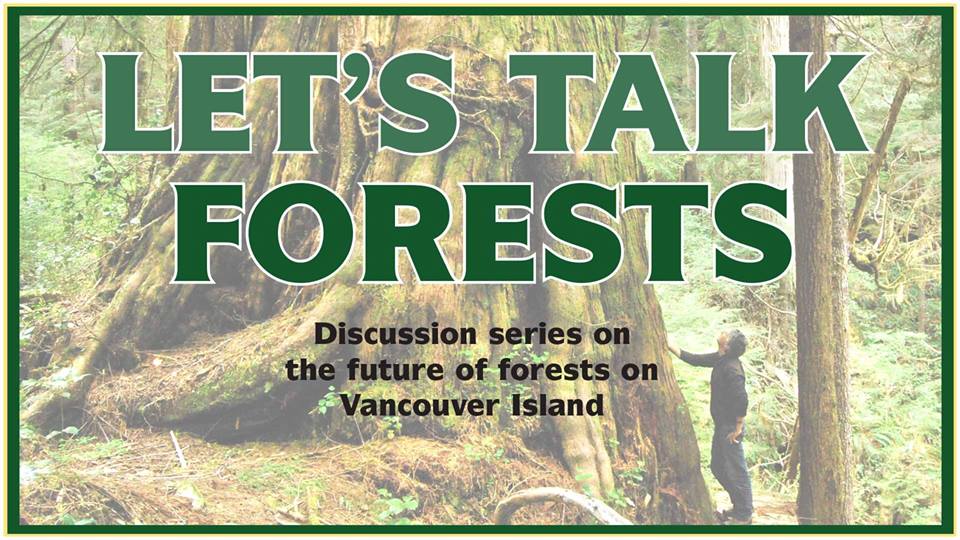 Forests and the industries they support are changing on Vancouver Island. Sierra Club BC and Wilderness Committee are hitting the road for discussions in communities about the state of our forests. We want to hear what you think about how we can make forestry in a changing climate work for communities, Indigenous peoples and ecosystems.

Vancouver Island’s iconic rainforests are under threat — much of the original forest has been cut down, and many ecosystems have been pushed to the brink. In an era of climate change, the importance of healthy intact old-growth rainforests couldn’t be greater.

How do we make a just transition to sustainable second-growth forest industry in a way that recognizes the rights, title and authority of First Nations who have thrived here since time immemorial? How do we ensure old-growth is protected in a way that works for local communities? How will forests and forestry be impacted by global climate change?

In a 6-stop discussion series, we’ll present the facts on what’s happening in Vancouver Island’s forests, and highlight potential solutions and paths forward.

Most importantly, we want to hear your ideas on how to better manage these precious ecosystems.

We hope you can join us!

These events are being held on the territories of the Kwakwaka’wakw, Nuu-chah-nulth, and Coast Salish peoples.

Are you in the Lower Mainland?

Join Sierra Club BC’s forest and climate campaigner Jens Wieting as we stroll among the giants in Stanley Park. Jens will lead us on an enlightening journey as we see some of the largest old-growth trees in BC.

This walk will take place on the unceded territories of the Squamish, Tsleil-Waututh and Musqueam First Nations.