What do you call a seagull that lives in a bay? … A bagel!

What do you call a seagull that lives in B.C.? You might be surprised to learn that there are a lot of different answers to that question. In B.C., there are at least 8 different species of gulls. Thayer’s gull is one of them.

Thayer’s gull is a medium sized gull found along the Pacific coast of B.C. Smaller than the more common Glaucous and Herring gulls, the Thayer’s gull is larger than Mew and Ringed-bill gulls (all of which look relatively alike). 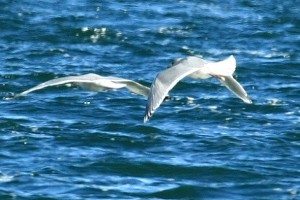 Like these other gulls, adult Thayer’s have a white head. They can be distinguished by their speckled grey backs, streaks of black and white on their wingtips, deep pink legs, and a red dot at the lower end of the yellow beaks. This chart can help you identify all of B.C.’s gulls based on their distinguishing characteristics!

The best time to spot Thayer’s gulls along the coast of B.C. is in the fall and winter. During the spring and summer they migrate up to the high arctic to breed on the edge of fjords and cliffs overlooking the ocean. At their breeding grounds, they use moss to build howl-like nests and hatch up to 4 chicks.

Thayer’s gull’s affinity for the ocean is also evident in what they eat. True “sea”gulls, they swoop down to the ocean’s surface to snag crustaceans and fish, and swallow them mid-flight. Far from being picky-eaters, however, Thayer’s gulls also scavenge for carrion and will feed on the the fish parts and guts thrown over ships and in harbours. Yuck!

That might sound more like the seagulls you are used to. I bet this sound is recognizable too!

Using the chart posted above and web resources like All About Birds, learn how to tell at least three of our gulls apart visually and (though more difficult, to be sure) by sound!

Featured photo of Thayer’s Gull by Kaaren Perry via flickr 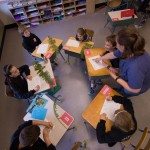 Drawing the Line in the Walbran
Scroll to top
MENU