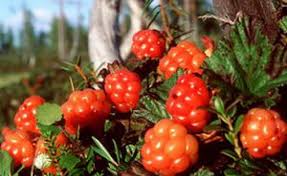 Across B.C., and much of the temperate world, berries are a surefire signal of summer. In the Taiga Plains, where summer is short and relatively cool, ripe cloudberries make it a special time.

What, you may ask, is a cloudberry? The cloudberry (Rubus chamaemorus) is a relative of the raspberry and salmonberry that grows in low-lying bogs and grasslands in northern boreal and subarctic climates around the world (Alaska, Canada, Scandinavia, Russia). Like other Rubus relatives, cloudberries are rhizomatous. They grow by spreading out inrhizomes – mat-like networks of underground stems from which new plants sprout. Unlike the Rubus’ you may be more familiar with, cloudberries only grow between 10 and 25 cm tall.

So what to look for next time you’re traipsing around a bog near Fort Nelson?  Look close to the ground for toothed leaves with 5-lobes. In early summer you will find white flowers. Later, you’ll find bright red, raspberry-like berries. Cloudberry has separate male and female flowers and depends on pollinators to produce berries and seeds. By late summer, the red berries soften and ripen to a deep amber colour and are ready for picking.

Cloudberries are sour but delicious. When left to be over-ripe they become sweeter and creamy in texture – almost like yogurt. In eastern Canada, they go by the name “Bake-Apple.” While it’s nice to think that they would taste like baked apples, the name is thought to come from the french question “Baie Qu’appelle?” which translates to “What’s this berry called?”

Cloudberries are high in vitamin C and are eaten fresh and preserved by people wherever they grow. They are also eaten by birds, such as thrushes, and bears. Moose and caribou eat the woody stems. 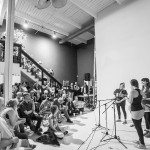 Check out the video from YELP’s Pull Together concert!
Scroll to top
MENU