VICTORIA—Sierra Club BC today released the following statement from Peace Valley campaigner Galen Armstrong in response to the provincial government’s decision to proceed with the Site C dam:

“Today is a dark day. The government has passed up its chance to stop this misbegotten project. Instead, it has betrayed First Nations and all those who voted in hope of stopping Site C.

“History will not look kindly on this decision. While the blame must be shared with the previous government, which recklessly proceeded without a proper review, this government has now assumed responsibility for the harsh environmental and social impacts to come.

“It is a cruel irony that on the 20th anniversary of the landmark Delgamuukw decision, the government has ignored its promise to implement the UN Declaration on the Rights of Indigenous Peoples. Under the Paris Agreement, climate action must be consistent with human rights and the rights of Indigenous peoples. Proceeding with Site C makes a mockery of these commitments.

“Today’s decision also underscores the need for electoral reform in B.C. It is highly unlikely projects such as Site C and Kinder Morgan’s pipeline and tankers project would have been approved under proportional representation. Voters who want to see politics done differently, including a reduction of the influence of powerful insiders, need to come together to vote in favour of proportional representation next fall.

“The BC Utilities Commission pegged Site C’s final cost at over $10 billion and Deloitte LLP puts that number at $12.5 billion—and it may end up costing even more, if major geotechnical challenges persist. This government has made the decision to saddle generations to come with an overwhelming debt burden and increased Hydro rates, to build a dam with no market for the power.

“We are bitterly disappointed, but today’s decision is not the end of the story. There’s far too much at stake for us to give up the fight against this abomination.

“The World Heritage Committee has set a February 2018 deadline for Canada to present a progress report on how it intends to implement the Committee’s recommendations, which include assessing Site C’s impact on flows into Wood Buffalo National Park, a World Heritage Site. The only way for the federal government to adequately address impacts both in the valley and downstream is to pull the permits for Site C. We will continue to hold the federal government’s feet to the fire.

“We will also support the West Moberly First Nations and Prophet River First Nation who intend to launch a lawsuit asserting their Treaty 8 rights, which they say are violated by Site C.

“Our hearts are with the people of the Peace River Valley today. We hoped they would see an end today to their long nightmare. We understand that many will need a chance to grieve, and then we will continue the fight.” 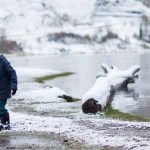