VICTORIA—“Awarding civil contracts on a project that is already the subject of five lawsuits and an international inquiry is a move that flies in the face of fiscal responsibility, disrespects First Nations rights, ignores enormous impacts on the Peace valley, and is deaf to the concerns of local governments across B.C. who have unanimously called for the project to undergo full regulatory scrutiny,” said Ana Simeon, Peace Valley campaigner. “It is a scorched earth tactic.”

Far from looking forward to opportunities from Site C as Premier Clark says, farm families in the Peace have launched a lawsuit to stop the destruction of a unique food oasis that can produce food for 1 million people. Having this land produce food through the ups and downs of climate change, droughts and spiking food prices will make all the difference to B.C. families being able to afford fresh fruits and vegetables. To destroy this land, at this time of global disruption, would be an irresponsible gamble with B.C.’s long-term food supply.”

“This is a project that is currently tied up in court in five lawsuits in both B.C. and Alberta – including three Treaty 8 cases in B.C., a case brought by Peace Valley landowners, and the Blueberry River First Nation’s case in Alberta for infringement of treaty.

The project is under intense scrutiny by the international community because of the threat it poses to a UNESCO heritage site, Wood Buffalo National Park. UNESCO is sending an investigative mission to B.C. this spring, and has formally requested that no further steps be taken on any projects that could cause irreversible damage pending the results of the committee’s investigation.”

Media Centre
Ecosystems 101: A nesting trio in the boreal forest 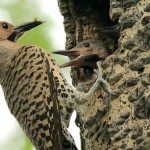