Sierra Club BC said today that the BC government should listen to the 223 international scientists who released a letter to the province regarding the management of BC’s forests. The letter highlights the need for urgent and immediate action to protect the globally unique ecological values of BC’s remaining primary and intact coastal and inland temperate rainforest.

“This call for action from 223 scientists is a stark international reminder that BC’s temperate old-growth rainforests are a global treasure and a global responsibility. There is no other place on this planet where intact tracts of rainforest of this kind still exist. They represent a unique ecological and cultural legacy. Their ongoing destruction must be stopped today, not tomorrow,” said Jens Wieting, Sierra Club BC’s senior forest and climate campaigner.

“These experts have studied what is happening in BC and the science is clear. British Columbia has inspired the world with the conservation agreements for the Great Bear Rainforest. But across more than 90 per cent of the province, logging continues like there is no tomorrow, with insufficient conservation and regulation.”

The experts are urging the provincial government to follow through on the promise made during last year’s election to use the ecosystem-based management approach implemented in the Great Bear Rainforest to safeguard British Columbia’s endangered old-growth rainforest.

BC’s temperate rainforests represent the largest remaining tracts of a globally rare ecosystem covering just 0.5 per cent of the planet’s landmass. Yet the current rate of old-growth logging on Vancouver Island alone is more than 3 square metres per second, more than 10,000 hectares per year.

The Sierra Club BC map shows that the remaining 218,000 hectares of the most endangered low-elevation old-growth rainforest with the biggest trees and highest carbon storage per hectare (good and medium productivity forest) now only cover 6.5 per cent of the island.

The scientists’ letter can be found at: https://sierraclub.bc.ca/wp-content/uploads/scientist-letter-BC-primary-2018-05-15.pdf 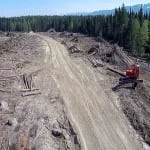 223 scientists call for rainforest protection as BC government auctions off...
Scroll to top
MENU