VANCOUVER—B.C.’s clean growth plan is a major step forward in the race to combat the climate crisis and secure a better future for British Columbians, said Sierra Club BC. Moving forward, more will need to be done to build on the strategy’s strengths, namely ensuring our targets are based on science and stopping new major energy projects that increase emissions.

“We welcome today’s announcement as an important step forward and a good day for all British Columbians. This is an excellent step towards defending our communities from climate impacts and building a strong clean energy economy that works for everyone,” said Caitlyn Vernon, Sierra Club BC’s campaigns director.

Since any plan is only as good as how it is implemented, Sierra Club BC welcomes the accountability mechanisms built into the Clean BC plan.

“The plan delivers specific, effective actions with transparent reporting and accountability, which deserves both applause and support,” said Vernon. “We will be watching to ensure that the climate advisory council has sufficient budget and capacity to do its work, can set interim sectoral targets and has the ability to revise pollution reduction targets in future in light of the latest science.”

Sierra Club BC is concerned that the plan will not reduce carbon pollution as much or as fast as the climate science tells us is needed.

The government’s continued commitment to LNG remains a matter of deep concern, given the massive carbon footprint of the LNG Canada project alone. The provincial strategy leaves it unclear how much carbon pollution is allowed from LNG terminals, and what binding mechanism will be used to ensure they cannot increase above a certain level.

“The most fundamental measure of accountability for climate leadership is whether it keeps our world below 1.5 degrees of warming,” said senior forests and climate campaigner Jens Wieting. “If we are to support livable communities into the future, we must reduce carbon pollution faster than currently planned, alongside all that is praiseworthy in this plan.”

The Clean BC plan details exactly how 75 per cent of B.C.’s 2030 carbon reduction target will be achieved, and sets out a timeline for detailing how the remaining 25 per cent reduction will be met in the next two years. There is no mention of how we will meet our future (2050) pollution reduction targets.

“While we believe this plan should be celebrated today and implemented starting tomorrow, it’s worth noting that we could more easily get to 100 per cent without LNG in the mix,” said Vernon. “It’s counter-productive to act to reduce carbon pollution on the one hand, while on the other hand expanding fossil fuel extraction.

“We are calling on all British Columbians to support this plan, and to work together to strengthen it into the future, in a way that replaces divisiveness with cooperation, and rejects partisanship in favour of our common interests.”

Media Centre
#VolunteerLove: Thank you for your impact! 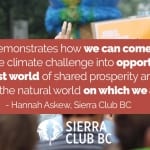 BC’s clean growth plan: A major step forward in the race to combat the climate...
Scroll to top
MENU