VANCOUVER – A promised “review” of natural gas industry fracking operations should be broadened to a full Public Inquiry that examines all aspects of the dangerous gas extraction technique, says a coalition of community, First Nation and environmental organizations.

The call on the new BC government is to broaden a promise first made by the NDP during the lead-up to the spring provincial election, and comes on the heels of new revelations about the fracking process, including:

“We believe that the NDP’s campaign promise to appoint a scientific panel to review fracking won’t be enough to fully address the true risks of deploying this brute-force technology throughout northeast BC. Current realities dictate that we need a wide-ranging, public inquiry,” says Ben Parfitt, a resource policy analyst with the Canadian Centre for Policy Alternatives, one of 17 groups making  today’s call.

The groups say a comprehensive examination of fracking is essential and that a broad formal Public Inquiry or Commission of Inquiry is necessary to investigate all the risks and harms associated with it.

The Inquiry must address whether or not provincial agencies adequately oversee fracking operations, ensuring that companies comply with existing laws and regulations, safeguard public health, and protect the environment. The Inquiry must have powers and sufficient funds to compel legal testimony, commission professional research, and hold public hearings across BC.

In August 2015 a 4.6 magnitude earthquake — the largest ever induced by a fracking operation — occurred in northeast BC when 422 million gallons of water was pumped underground at one gas well. The amount of water used was more than eight times greater than that used in the average fracking operation in the United States.

Recently, the Canadian Centre for Policy Alternatives reported on a major regulatory breakdown as fracking companies rushed to build dozens of unlicensed dams for use in their water-intensive fracking operations in northeast BC.

“We are deeply troubled that this dam-building free-for-all occurred on First Nation lands, that First Nations were not fully consulted about the true size and extent of these dams, and that our Indigenous Title, Rights and Treaty rights are still completely ignored or denied. There are still no substantive or meaningful opportunities to fully participate in decisions around how water resources are managed in our respective territories,” says Grand Chief Stewart Phillip, President of the Union of BC Indian Chiefs. “We need a credible, strong, Independent Inquiry to get to the bottom of this.”

“Right now, we know that British Columbians are not getting accurate and transparent information about the real environmental damages from oil and gas activities,” said Ian Bruce, Director of Science and Policy at the David Suzuki Foundation. “Our peer-reviewed research shows that methane pollution from B.C.’s oil and gas sector, mainly fracked gas, is at least 2.5 times larger than what both industry and the B.C. government report.”

“We are calling on the B.C. government to make it a priority to get this pollution problem under control by enacting proper oversight and regulations and ensure industry is responsible for being part of the solution.”

“Recent studies have demonstrated an increase in premature births, asthma, and congenital heart defects in people who live close to U.S. fracking operations,” says Dr. Larry Barzelai, head of the BC Chapter of the Canadian Association of Physicians for the Environment. “Can we be assured that the same complications will not occur in B.C.? We think that a properly funded Public Inquiry, with a comprehensive and strong mandate, is needed to answer critical questions such as these.”

Among the questions the groups say a Public Inquiry on fracking should address are:

The previous government ignored a call for such an inquiry in 2011.

The organizations jointly issuing this release and their spokespersons:

Canadian Association of Physicians for the Environment – Dr. Larry Barzelai – 604-649-7534 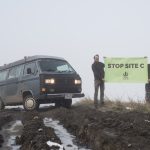