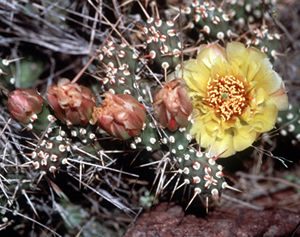 The prickly pear cactus has flat, fleshy pads that look like large leaves. The pads are actually branches or stems that help with water storage, photosynthesis and producing the bright yellow flowers.

These cacti grow through the southern Rocky Mountains in B.C., dry plateaus, in ponderosa pine forest openings and other dry, open sites on sandy or gravely soils.

Prickly pears bloom in late spring and early summer. The flowers are large and yellow, and they turn into small, hard, pear-shaped fruits.

Large insects, wood rats and the desert turtle all eat the prickly pear.

Prickly pears were eaten by various First Nations, and the cactus was especially valuable to old men; when they ate the cactus, it helped them urinate more freely. The spines were also used as needles for piercing ears, and the stems were roasted and eaten as a green vegetable. When the cactus blooms, it’s time to pick the saskatoon berries.

The fruits, called tunas, are eaten in many countries, including Canada, once the spines have been removed. The fruits are also known to help people with diabetes because they are low in sugar. Prickly pear jelly is great on toast. 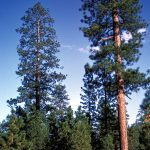 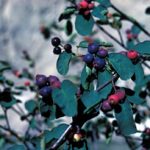