This is among the largest number of people appearing before Justice Thompson in a single day since Fairy Creek protests began.

VANCOUVER/UNCEDED xʷməθkʷəy̓əm (MUSQUEAM), Sḵwx̱wú7mesh (SQUAMISH) AND səlilwətaɬ (TSLEIL-WAUTUTH) TERRITORIES – One hundred and sixty Fairy Creek land defenders are scheduled to appear in a Nanaimo court this morning, one of the largest groups in a single day since police action to clear logging roads into old-growth forests in the Fairy Creek area in Pacheedaht and Ditidaht territory on Vancouver Island ramped up in the spring of 2021. Another 25 forest defenders are scheduled for sentencing hearings this week, also marking the largest number in a single week since the protests began.

The conflict between logging company Teal-Jones and forest defenders has escalated into one of the largest acts of civil disobedience in Canadian history, with over 1,100 protesters arrested on the site as of February 11, 2022. Land defenders want the provincial government to follow through on their promise to protect globally rare and endangered old-growth forests in B.C.

“This day in court is a dramatic example of the consequences of misguided police action to defend the status quo at almost any cost and continue clearcutting the last old-growth despite the climate and biodiversity crisis. The tax dollars spent to clear logging roads would be better spent financing Indigenous-led conservation solutions,” said Jens Wieting, Sierra Club BC’s Senior Forest and Climate Campaigner.

“B.C.’s last old-growth forests continue to disappear at a similar rate as Brazil’s Amazon rainforest. There is very little time left for Premier Eby to implement the old-growth promises of his government before it’s too late,” added Wieting.

While logging has been deferred for the Fairy Creek watershed, adjacent at-risk old-growth forests on Southern Vancouver Island and in many other parts of the province remain without temporary protection. B.C. will continue to see similar conflicts as old-growth logging continues with no certainty whether at-risk stands will be spared.

According to the latest provincial update, logging has been deferred in less than half of the 2.6 million hectares of the most at-risk stands recommended for deferrals.

Additionally, the annual old-growth logging rate has remained relatively stable before and after the provincial old-growth promises made in 2020. Provincial funding commitments to enable deferrals for all at-risk old-growth forests and Indigenous-led conservation solutions remain insufficient.

“Premier Eby has pledged to accelerate the BC NDP’s old-growth plan and to step up urgent action to address the climate crisis. His government has a unique opportunity to partner with the federal government to secure adequate funding tied to milestones and timelines to increase protection of highly endangered and carbon-rich ecosystems across B.C.,” said Wieting.

“A strong British Columbia–Canada Nature Agreement would give people in B.C. hope that this government is stepping up to the plate and inspire confidence in other parts of the world that it’s not too late to safeguard the web of life.”

For international comparison: The 10-year average rate of deforestation of the Amazon rainforest of Brazil was 0.2% per year, based on data from the National Institute for Space Research and the Food and Agriculture Organization (FAO). According to B.C. government data, the last old-growth in B.C. was being clearcut at a rate of 0.3% in 2021. About 80% of the Amazon rainforest in Brazil remains standing. In B.C., the majority of old-growth forests have been logged and big-tree old-growth ecosystems have been reduced to single digit percentages of their original extent, and for certain ecosystems (Coastal Douglas Fir) to about 1% of their original extent. 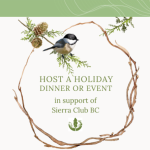