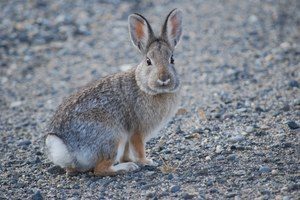 Nuttall’s cottontail are the smallest rabbit-eared animals in the province. Their coats are grayish brown above, and white below. They have black-tipped ears.

They are found from British Columbia to southern California, and east through Saskatchewan, Montana, and New Mexico. Cottontails live in rocky wooded or brushy areas. In B.C., this animal lives in the Southern Interior Ecoprovince.

Cottontails eat mostly grass and other green plants. They are nocturnal—most active at dawn and dusk. When they are threatened they thump their hind feet on the ground as an alarm signal.

Breeding occurs throughout the summer months. Females build elaborate nests of leaves and twigs and then line them with their own fur. Cottontails can have up to nine offspring and they are independent from the mother after only one month. Predators include bobcats, coyotes, owls, foxes, weasels, and hawks. It is also the most popular game animal in the US. 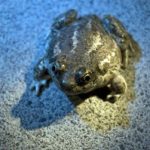 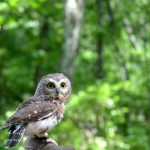