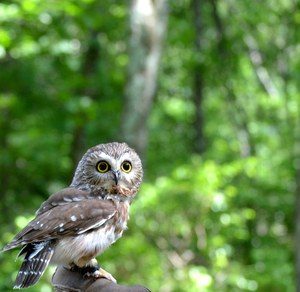 Northern saw-whet owls are one of the smallest species of owl in North America, growing just over 20 centimetres tall. They have a white and brown streaked belly and neck , a reddish-brown body and a grey face. Their eyes are yellow, and their feet and legs are covered in feathers.

These owls are found from Alaska to Mexico, throughout North America. They live in thick forests and are often found near streams or swamps.

They eat insects, small mammals, amphibians and songbirds. They are completely nocturnal and most of their foods are animals that are active at night. They are silent fliers and can sneak up on their prey without being noticed. If scared, they can puff up and stay still to look like a branch or bump.

They breed in spring and early summer and the male calls to attract the female; sometimes he offers her a mouse. They nest in a hole in a tree and she lays five or six eggs. Once hatched, they can fly after about a month. Northern saw-whet owls have been recorded living for over 17 years. Mammals and larger birds, including owls and hawks, will eat saw-whet owls, and their habitat is threatened by logging and development. 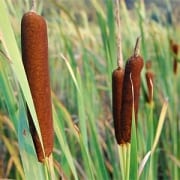 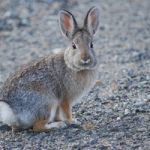 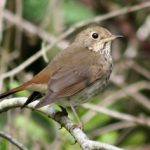