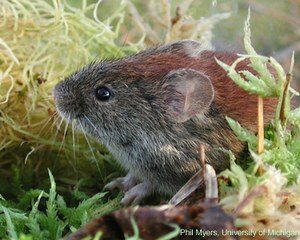 Northern red-backed voles can be identified by a reddish brown stripe of fur which runs from their head to the base of their tail. They are 14 centimetres in length and their tail is about 4 centimetres. They weigh only 24 grams.

Northern red-backed voles live from Alaska and B.C. across Canada to Hudson’s Bay. They are commonly found near water and in subalpine forest.

The diet of northern red-backed voles includes nuts, seeds, fruits, berries, leaves and shoots, bark and roots of plants and trees, lichens, and underground fungi and insects. They are generally nocturnal animals and only come out sometimes during the day. They do not hibernate and but they live on food collected during the summer months to get through the cold northern winters. This rodent has a habit of tunneling through the subalpine forest floor, nesting in the hollows of tree roots and turning grass into a ball-shaped nest.

Northern red-backed voles do not live very long but they are ready to have their own young only eight weeks after birth. Their litters are born between May and October and they have an average of two to four litters per season. Since they can have between four and seven young at a time, and the females that are born in early spring are also able to have litters by the fall, northern red-backed voles reproduce quite quickly. There is no major threat to this animal but they are the prey of a lot of different animals. 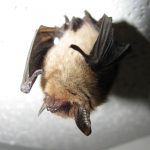 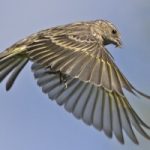