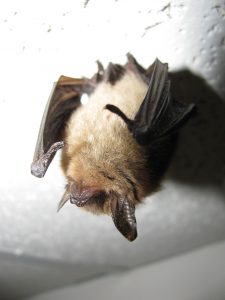 Northern long-eared myotis are mouse-eared bats with long rounded ears. They have a distinct dull-brown coloured spot on their shoulder. The females are generally larger than the males but the average size for both is 78 millimetres. They weigh from six to nine grams and have a wingspan of 23 to 26 centimetres. They are different from other similar bat species because they have a longer tail and larger wing area.

The range of this bat species is all across Canada from eastern, central and northern British Columbia to Newfoundland and into the southern Untied States as far as Florida through the Dakotas. The northern long-eared myotis are found in boreal forests and the forests of the cedar-hemlock ranges of B.C. that are generally wetter habitat areas with lakes and ponds.

The main part of the bats diet is insects that fly at night such as caddisflies, moths, beetles, and flies. With very poor eyesight and an active nightlife, the northern long-eared myotis have adapted by using echolocation to find their prey. They generally hunt during two different periods: at dusk and once again at dawn after a rest period called night roosting. The females and males always roost separately. Toward the end of summer the bats find others of their kind and move to places where they will hibernate. In their place of hibernation they are usually alone although they sometimes hibernate with a few others.

Although mating of the myotis occurs in the fall, the females store fertilized eggs and do not become pregnant until the next spring after they come out of hibernation. A single young bat is born to each mother in late June or early July. The northern long-eared myotis can live up to 18.5 years. Threats to this bat species include forestry practices because they decrease the amount of trees available to make day roosts and form colonies for nursing. Chemical use on insects, the main food supply for the bats, also threatens their population. 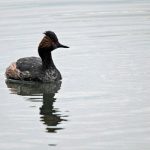 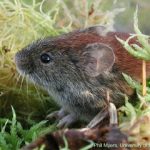