VICTORIA (Unceded Lekwungen Territories) — One year after the B.C. government shared its Old-Growth Strategic Review (OGSR) report and Premier John Horgan committed to implementing all of the panel’s recommendations, Ancient Forest Alliance, Sierra Club BC and Wilderness Committee have released a report card assessing the province’s progress on their promise to protect old-growth forests.

The OGSR’s report, made public on September 11, 2020, called on the province to work with Indigenous governments to transform forest management within three years.

The panel recommendations include taking immediate action to protect at-risk old-growth forests and a paradigm shift away from a focus on timber value and towards safeguarding biodiversity and the ecological integrity of all forests in B.C. However, old-growth-related headlines in recent months have been dominated by police violence and arrests of forest defenders, rather than protection. As of this week, with at least 866 arrests, the fight to save what is left is now Canada’s biggest ever act of civil disobedience. 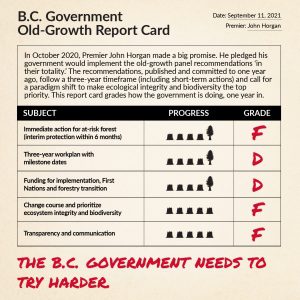 See a full version of the report card here: https://sierraclub.bc.ca/wp-content/uploads/2021-September-OGSR-report-card-reduced-size.pdf

“The tough reality is that thousands of hectares of the endangered forests that Premier Horgan promised to save a year ago have been cut down since then,” said Torrance Coste, national campaign director for the Wilderness Committee. “We’ve seen pitifully little concrete action to protect threatened old-growth, and ecosystems and communities are paying the price for the BC NDP government’s heel-dragging.”

In their report card, the organizations issued new grades on the B.C. government’s progress in five key areas, crucial for the implementation of the panel recommendations: immediate action for at-risk forests (F), the development of a three-year work plan with milestone dates (D), progress on changing course and prioritizing ecosystem integrity and biodiversity (F), funding for implementation, First Nations and forestry transition (D), and transparency and communication (F).

“Our assessment is as devastating as a fresh old-growth clearcut. The ongoing ‘talk and log’ situation combined with police violence and the escalating climate and extinction crisis can only be described as predatory delay,” said Jens Wieting, senior forest and climate campaigner at Sierra Club BC. “Premier Horgan’s failure to keep his promise has now fueled the largest act of civil disobedience in Canada’s history, larger than Clayoquot Sound, with no end in sight. People know that clearcutting the last old-growth is unforgivable”

“In the last six months, the B.C. government has failed to allocate any funding toward protecting old-growth, instead funnelling millions into police enforcement to clear a path for old-growth logging,” said Andrea Inness, forest campaigner for the Ancient Forest Alliance. “Without funding to support old-growth protection, the BC NDP government is forcing communities to make the impossible choice between revenue and conservation. They’re choosing inaction while the conflict in B.C.’s forests worsens.”

In July, the province created a technical expert panel to inform the next announcement of old-growth deferral areas. Repeated government remarks about new deferrals in the summer, that are yet to be announced, have sparked a glimmer of hope for science-based interim protection for all at-risk old-growth forests in B.C. in the near future.

Ancient Forest Alliance, Sierra Club BC and the Wilderness Committee will continue to mobilize their tens of thousands of supporters and hold the government accountable for its old-growth promises. The next report card will be issued on March 11, 2022.

Download a PDF of the full report card here.

Download a JPEG version of the full report card here. 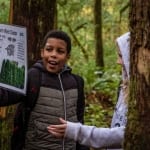 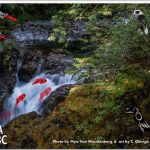