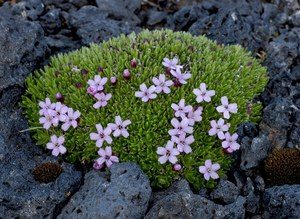 Moss campion is a short plant that forms green mats up to 50 centimetres wide. It has small pink flowers that can cover the whole surface of the mat.

Moss campion is found in slightly moist areas in mountains, on rocks or cliffs and in open cold areas. It’s common throughout the northern parts and mountains of B.C.

The pink flowers turn into small fruits with little seeds, but moss campion mostly spreads by its thick roots.

It is not a common food source, but deer or sheep may occasionally graze.

It can be eaten boiled, and has been by Icelandic peoples.

Gardeners grow this moss for rock gardens. The name “campion” comes from the word “champion” because the flowers of moss campion were used on the head wreaths for people who won sports events in Europe. 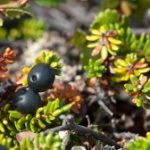 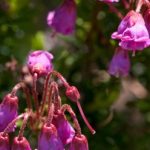