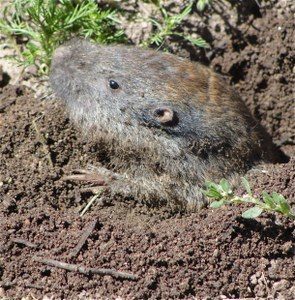 Meadow voles are often called field mice,but they actually have shorter tails and ears than mice and are brown with silver-grey bellies.

Meadow voles are found in grassy meadows, mountaintops and marshes throughout Canada (except Newfoundland) and the Northern US (from Wyoming and Missouri to South Carolina).

They are nocturnal herbivores who eat their weight worth of flowers, leaves and seeds of grasses, plantain and clover, as well as tubers each day. You can find traces of meadow voles by the ‘grass clippings’ that they leave behind when they chop up plant stalks little by little while trying to reach their favourite part of the plant: the seed heads. When in trouble, meadow voles stomp their hind feet and cry out to warn their fellow voles of the danger.

Meadow voles are fast and frequent breeders: they can have up to 11 young in one litter and have been known to have up to 13 litters during the breeding season which lasts from spring to fall. Their main threat is predation by other species including housecats, foxes, coyotes, snakes, hawks and owls. 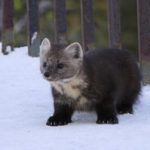 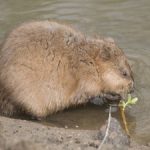