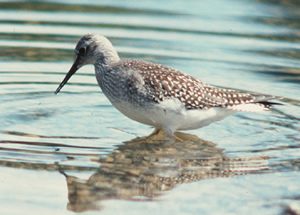 These sandpipers have long yellow/orange legs with a white or spotted underbelly, and a grey/brown black mottled back and wings. In the winter, their back and wings become dark brown with faint white spots, and they develop a fine white ring around their eyes and a white eyebrow.

You can find them near bogs, marshes, lakes, rivers, and mudflats in the northern parts of Canada (from Ontario to B.C.) and Alaska in the summers, and in the southern US to as far south as Argentina in the winters.

They eat mainly insects, but also crustaceans, small fish, snails and worms. They are territorial birds and keep their eyes out for trespassers, dipping their head up and down while watching them.

Lesser yellowlegs breed in the north (from Alaska to Hudson Bay) and lay four speckled eggs in grass-lined nests they have scratched into the ground. Humans are the greatest concern for these birds: in the past, people hunted them for their tasty meat, and these days, it is important that we preserve enough coastal and shoreline habitat to accommodate large numbers of these birds on their migratory paths. 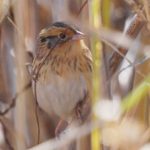 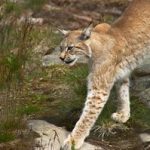