As the winter chill sets in, bats all over BC are curling up in furry little clusters. We’re beginning to learn more about their winter hideaways.

As winter approaches, bats seek refuge in karst cave systems. Due to its high humidity, constant, cool temperatures (3 – 4 °C) and dark conditions, karst is an ideal habitat for bat hibernation. As karst landscapes cover approximately 14% of the earth’s surface, researchers all over the world are studying the significance of karst to the viability (well-being) of this species.

With 16 unique species of bats, British Columbia boasts the greatest biodiversity of bats in Canada. These furry, winged creatures play an essential ecological role as pollinators, seed dispersers, and insect regulators (a single little brown myotis can catch up to approximately 600 pesky mosquitoes in an hour!). Guano, or bat waste, is rich in nutrients, contributing to the fertility of the soil and it supports insects, fungi, bacteria, and lichens.

In the summer, bats require suitable roosting and maternity sites (places where females congregate to give birth and raise their baby bats, known as pups) that are in proximity to foraging grounds. This includes trees, crevices in rocks, buildings and bat houses alongside or close to freshwater and forest edges.

According to Doreen Parker, a bat specialist in Alaska, “Some of the characteristics of the old growth [forest] are very important to bats – the diverse canopy structure, the [ancient] trees with the loose bark falling away from the tree trunk, there’s snags, decaying trees, trees with cavities and old woodpecker holes for them to roost in.”

Clear-cut forests and open fields have been found to be unsuitable for bats, as they do not provide essential roosting habitat.

Rare find of the Hoary Bat, the largest in Canada. Photo: Mark Worthing

A study conducted in Alaska on the impacts of timber harvesting on bat activity in South Eastern Alaska found that riparian (vegetation along the river edges) areas and old-growth forests have the greatest abundance of bats. Forests underlain by karst are typically higher in productivity in comparison to non-karst forests, and are marked by an abundance and great diversity of karst caves. It is likely that karst forests are vital bat habitat as they provide foraging, roosting and hibernation sites.

In Malaysia, studies have been conducted by conservation biologists from Queen Mary University that confirm the importance of limestone karst outcrops for the biodiversity of cave-dwelling tropical bats and tropical bats living in forest fragments.

Bats have become a conservation priority in BC, following a public plea made by Environment Minister, Mary Polak last June, requesting that emphasis be placed on identifying bat habitat and determining their population abundances as “there is surprisingly little known about local bat species and their numbers.”

Six American and Canadian conservation groups, including Sierra Club BC, took initiative and collaboratively organized a Bat BioBlitz. The bat inventory involved 10 bat biologists, and seven citizen scientists and was led by Dr. Cori Lausen, a prominent Canadian bat researcher. Over the four nights, eight sites were inventoried, resulting in 31 bats being caught and 1049 bat passes being detected, using mistnetting and acoustic sampling techniques. Of the 11 bat species suspected to inhabit the richly biodiverse area, seven species were detected, including the endangered little brown myotis.

After being warmed up this bat is ready for release. Photo: Mark Worthing

This research was published just as the CBC reported this week that Eastern Canadian bat populations have been devastated by the white-nose syndrome. The fungal disease, which spread to Canada in 2010, impacts hibernating bats. Fuzzy white growths appear on the affected bat’s muzzle and wings, causing the animal to behave erratically and use up its precious fat reserves. White-nose syndrome has led the functional extirpation (a few bats may remain, but they are unable to repopulate the ecosystem) of the little brown myotis, northern myotis and tri-coloured bat, according to Graham Forbes, a bat species specialist subcommittee member of the Committee on the Status of Endangered Wildlife in Canada (COSEWIC) and biologist at the University of New Brunswick. The disease has yet to reach Manitoba, but is reported to be spreading west at an average rate of 200 – 250 km per year. Forbes stated he would be “surprised” if western bat populations aren’t eventually impacted by this deadly disease.

The only way to mitigate impact and protect BC bats is to locate their hibernation sites in karst landscapes. As of current, large bat hibernacula have not been identified in the province, and this will be the focus of future surveys in the Flathead River Valley.  According to Cori Lausen, “Through collaborations with cavers we have only just begun to search for bat hibernacula here. It’s imperative that we continue the search in the Flathead for bat hibernacula since large clusters of bats may be present but undiscovered.” Caving groups, such as the Alberta Speleological Society and the British Columbia Caving Federation have been exploring alpine (mountainous) karst in the Canadian Rockies and Columbia Mountains since 1997 and have conducted preliminary cave surveys and reports, which can be found in the Canadian Caver Magazine, and newsletters produced by the two caving groups.

Although there currently is no cure for the disease, researchers in the United States are researching potential vaccines and bacteria with antifungal properties to save the bat from extinction in North America.

The Flathead Wild team is active in the movement to protect this unique environment. For more information on how to get involved and become a Friend of the Flathead, check out the campaign website. 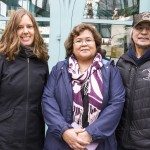