Over 500 people gathered on the steps of the Federal Court of Appeal in Vancouver on Thursday to rally in support of eight First Nations on their first day in court against the federal government.

“The federal government has mismanaged the Enbridge file from the beginning,” said kil tlaats ‘gaa Peter Lantin, President of the Haida Nation in a press release from the Union of B.C. Indian Chiefs (UBCIC). “We are in court to hold the federal government accountable to the highest law in Canada – the Constitution. We believe they are shirking their duties and responsibilities to First Nations in pursuit of corporate deals and board appointments.”

The rally was organized by UBCIC and the Yinka Dene Alliance and was attended by supporting nations, environmental groups and other allies who want to see the Enbridge pipeline stopped. Many supporters travelled hundreds of kilometres including a huge contingent from Haida Gwaii in particular.

“Today we’re fighting an unlawful environmental assessment and review process that failed to meet its constitutional obligations to First Nations,” said Chief Councillor, Arnold Clifton of the Gitga’at First Nation in the UBCIC press release. “Of the 209 conditions placed on Enbridge by the federal government, not one of them reflected our community’s concerns about the project. We owe it to our children to defend our rights and our way of life from the dangers of oil tanker traffic.”

Sierra Club BC, together with RAVEN trust has been fundraising for these legal challenges through the Pull Together campaign and supported the rally with online promotion, flyering and #UnitedAgainstEnbridge signs.

“These judicial hearings challenge the flaws in the joint review panel process which did not constitute real consultation with First Nations,” says Sierra Club BC outreach coordinator Galen Armstrong. “It’s important to have strong environmental assesments that people can trust, in order that we can make decisions that make sense for our society. These hearings could push Canada back in this direction.” 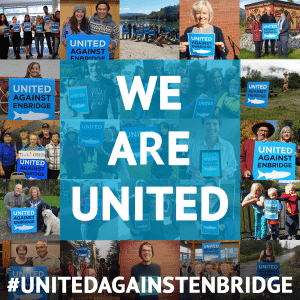 Media Centre
Let’s put the environment on the election map 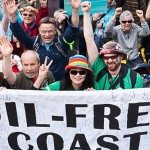 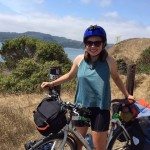