Toronto, ON – As a Ministerial Panel is due to report on this summer’s last minute revisiting of the Kinder Morgan pipeline and tanker proposal, environmental groups from across Canada today sent MPs a briefing note on the fundamentally flawed review process. Prepared by Sierra Club BC, Environmental Defence and Équiterre, the document shows the lack of public confidence in the Kinder Morgan process. Restarting the Kinder Morgan review after reforming the NEB is the only viable option.

“The NEB review of Kinder Morgan was hopelessly biased towards corporate interests and excluded public participation, environmental impacts and climate change impacts from its deliberations. Unfortunately, despite our high hopes, Prime Minister Trudeau’s ministerial panel had no way to remedy these deficiencies,” said Caitlyn Vernon, Campaigns Director with Sierra Club BC.

“The only conclusion the federal government can properly make from the feedback at the public meetings this summer is that Canadian communities do not grant social license for this project. 91 per cent of presenters were opposed, joining 210,000 petition signers, 22 B.C. municipalities and 66 First Nations.”

Environmental groups Sierra Club BC, Environmental Defence and Équiterre sent briefings to all 338 MPs this morning outlining the flaws that plagued the National Energy Board (NEB) review of Kinder Morgan. The briefings also summarized the serious flaws in the Ministerial Panel’s public meetings, which were hastily held this summer to garner additional input from affected communities and First Nations. Without any mandate or formal structure, they ended up just being a place for community members to vent their frustrations with the process and opposition to Kinder Morgan. The panel is due to report to the Minister of Natural Resources this week.

“The Prime Minister hasn’t fulfilled his promise to review Kinder Morgan under a fundamentally overhauled process,” said Patrick DeRochie, Climate & Energy Program Manager with Environmental Defence. “Canadians from coast to coast are concerned about Kinder Morgan because they know that the NEB cannot be trusted to protect our land, water and shared climate.”

During its review, the NEB curtailed public participation, ignored scientific evidence from intervenors, and failed to investigate health impacts or adequately consult First Nations. The previous federal government even appointed a former Kinder Morgan consultant to the NEB.

“Canadians voted for a new federal government that promised to fix the broken NEB and restart pipeline reviews – including Kinder Morgan,” Steven Guilbeault, Senior Director of Équiterre added. “Instead of a reformed NEB, we got a Ministerial Panel with no mandate to make recommendations, further undermining public confidence.”

As the federal government approaches a final decision on the pipeline and tankers in December, the groups are reminding all MPs that the discredited Kinder Morgan review is not the way to objectively assess major fossil fuel infrastructure in an era when Canada must fulfill its domestic and international climate commitments. 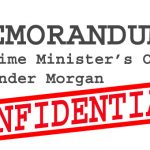