In an open letter released today, more than 25 organizations, including Amnesty International, the David Suzuki Foundation, and Sierra Club BC, denounced the project for violation of rights protected under Treaty 8, the Canadian Constitution, and international human rights law.

Although promoted by the government of BC as a “clean” source of renewable energy, the joint federal-provincial environmental impact assessment panel concluded that the Site C dam would severely and permanently undermine Indigenous peoples’ use of the land and destroy important cultural sites and a unique ecosystem.

“As we said in the letter, this is not just another resource development project,” said Candace Batycki, spokesperson for the Yellowstone to Yukon Conservation Initiative, one of the signatory organizations. “The Site C dam is one of the largest resource development projects underway in Canada and its impact on the environment and local First Nations will be severe.  Given the review panel’s findings, it’s alarming that it was approved in the first place.”

The letter calls on the federal government to rescind all permits related to the construction of the dam and to review the previous government’s decision to approve the project despite its impact on Treaty rights.

Maude Barlow, National Chairperson of the Council of Canadians said, “Prime Minister Trudeau and his government made a clear public commitment to building a new relationship with Indigenous peoples based on respect for the Treaties, the Constitution, and international human rights law. If it intends to keep that promise, the federal government needs to take immediate, decisive action on Site C.”

Jennifer Henry, Executive Director of KAIROS said, “Reconciliation requires a definitive change from the treatment of Indigenous peoples that has already caused so much harm. As Canadians concerned about social justice and the environment, we are calling on Prime Minister Trudeau and his government to make it clear that respect for Treaty rights will not be sacrificed.”

Joe Foy, Wilderness Committee, said, “During the recent climate change negotiations in Paris, Canada was clear that ‘clean energy’ requires respect for both human rights and the environment. We’re asking that they put these principles into practice at home.”

The letter was signed by: 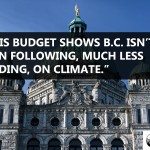 Budget 2016 kicks the climate can down the road, yet again
Scroll to top
MENU