Take a stand for old-growth forests
February 6, 10:00am
In communities across BC

Join us on Wednesday February 6 for a day of action for forests!

We’ll be delivering letters to MLA offices across the province to send a message to the BC government: immediate, decisive action must be taken to enact a moratorium on old-growth logging in critical hotspots like the Central Walbran. Protection for Vancouver Island’s last ancient rainforests must be combined with strong support for First Nations and good long term forestry jobs.

With help from Leadnow, Sierra Club BC has helped 15,000 old-growth forest supporters send a letter telling Forests Minister Doug Donaldson they expect strong action for ancient rainforests. Now it’s time to increase the pressure and make sure all BC MLAs get the message.

Sierra Club BC will be leading delivery events in Courtenay-Comox, Nanaimo, Langford and Vancouver. We’d love for you to join us or to deliver a letter to your own MLA on the same day.

To add an event in your area or do a letter delivery to your MLA, please contact galen@sierraclub.bc.ca. We’ve created a toolkit with suggestions, talking points and images you can print out for your visit. We’ll also add your town to the list of MLA visits on our media release!

Haven’t sent your own letter yet or want to know more about the crisis in ancient rainforests?

We’ve got a handy letter tool and links to resources. 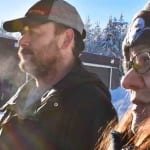