Sierra Club BC released the following statement from campaigns director Caitlyn Vernon in response to today’s joint federal-provincial announcement about electrification of fracking and LNG:

“Electrification of fracking and LNG is not effective climate action. It’s the opposite: it locks us into ongoing carbon pollution that will worsen the climate emergency, at a time when we have very few years to rapidly phase out the use of coal, oil and gas.

“Whatever gas is saved by electrifying fracking operations will still be burned when the gas is exported overseas. Today’s announcement has no net benefit for the climate. By facilitating the expansion of fracking, it will make things worse.

“Our health and well-being will suffer more. Our children’s future will be further compromised.

“Sierra Club BC supports the provincial government’s CleanBC program. We agree that rapid electrification is at the core of an effective response to the climate crisis, but electrification must transition us away from the use and export of fossil fuels, not lock us into ongoing carbon pollution.

“The 2019 B.C. budget announced $107 million for cleaner transportation, and $58 million for improving the energy efficiency of buildings, creating good jobs in the process. Yet this investment pales in comparison to today’s announcement of $680 million in taxpayer dollars to support the fossil fuel industry whose carbon pollution threatens our health and security.

“Kids around the world have been taking to the streets calling for governments to defend them, their future, and the places they love from the threats posed by the climate emergency. ​And yet the day after Greta Thunberg arrives in North America on a sailboat, our governments are crushing the hopes of young people by subsidizing oil and gas corporations rather than investing in renewable energy solutions.

“We are in a climate emergency. For our children and grandchildren, we must rebuild an energy system based on renewable energy, not fossil fuels.” 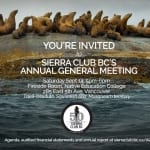