VANCOUVER – Ecojustice and Sierra Club BC are in court this week to challenge the British Columbia government’s decision to exempt two Petronas Canada dams from environmental assessments — after the company had already gone ahead and built the dams unlawfully.

The Town Dam and Lily Dam are located north of Fort St. John, B.C. Both dams store water used in fracking operations, making them a key part of a network of infrastructure linked to LNG development in the province.

On behalf of Sierra Club BC, Ecojustice lawyers will appear in the British Columbia Supreme Court on Oct. 3 and Oct. 4. There, they will argue the province’s decision to exempt the dams from environmental assessment is not only extraordinary, but is not an option available to the province under the law.

Representatives from Ecojustice and Sierra Club BC released the following statements at the start of the hearing.

“Petronas Canada acted with flagrant disregard for the province’s environmental laws when it built the Lily and Town dams without first receiving the required legal approvals.

“The province’s decision to exempt the dams from environmental assessment sets a dangerous precedent — and suggests the government is not only unwilling to punish companies that break the law, but may actually reward them by facilitating a less rigorous review processes.”

“If this retroactive exemption is allowed to stand, British Columbia’s reputation for lax enforcement of environmental regulations will only get worse.

“It’s irresponsible and unacceptable for the B.C. government to let oil and gas corporations such as Petronas Canada knowingly break the law with no consequences.

“In an era when carbon pollution from oil and gas companies is threatening our communities with extreme weather like flooding and wildfires, we need stronger laws and better enforcement to put the health and safety of our communities ahead of corporate profit.”

Ecojustice is Canada’s largest environmental law charity. Ecojustice goes to court and uses the power of the law to defend nature, combat climate change, and fight for a healthy environment for all.

Sierra Club BC works to defend B.C.’s wild places and species, within the urgent context of climate change. 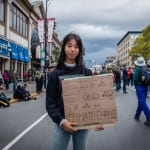 What’s next: 10 ways you can build on the climate strike momentum
Scroll to top
MENU