“Why is our government spending billions to subsidize fossil fuel corporations when the resulting extreme weather will put B.C. communities at risk of increasing wildfires and drought, and rob our young people of a livable future?” asked Sierra Club BC’s campaigns director Caitlyn Vernon. “We have just eleven years to limit climate pollution and defend our life support systems, yet instead of doubling down on the energy efficiency retrofits and public transportation infrastructure needed to fulfill the important CleanBC program, this government is throwing fuel on the flames of the climate crisis.”

The B.C. government’s legislation helps enable more than $5 billion in subsidies to the foreign-owned LNG Canada conglomerate. These include subsidized electricity rates, exemption from PST during construction, elimination of the LNG income tax, and a future tax credit once production begins.

“This massive giveaway can’t be squared with the provincial government’s commitment to reducing climate pollution,” said Vernon. “It’s like digging a hole and trying to fill it at the same time. There is nothing ‘clean’ about fracked gas, and we could be creating more jobs and security for our communities by investing in green renewable energy instead.”

The world remains on a path to more than 3°C of warming, which would be catastrophic. Severe climate impacts are becoming an increasing fact of life in B.C., from record breaking wildfire seasons to droughts and flooding. In March of this year, temperature records were broken across the province, and Vancouver Island is experiencing low water levels more typical of those usually recorded in August.

B.C.’s carbon pollution has continued to rise, increasing 1.5 per cent in 2016, according to figures quietly released by the Province in December.

The CleanBC strategy, announced last fall, is a plan to get to 75% of B.C.’s current climate pollution targets. As such, it is a major step forward in the race to combat the climate crisis and secure a better future for British Columbians, although it will not reduce carbon pollution as much or as fast as the climate science tells us is needed.

“B.C. communities need to be given the tools to adapt to increasing extreme weather events, secure in the knowledge their governments are doing everything in their power to reduce climate threats,” said Vernon. “We need clear-eyed, practical policies to build resilience and hope for a livable future, not obscene giveaways to fossil fuel multinationals that are making things worse.” 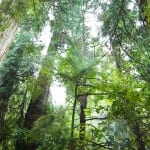