Sierra Club BC released the following statement from communications director Tim Pearson in response to the release of the 2017 B.C. Budget:

“This budget offers 1950s thinking in response to 2017’s challenges.

“Where are the investments in the affordable, renewable energy alternatives and innovation that will power our economy and provide jobs now and far into the future? Nowhere.

“Instead, we get support for the Kinder Morgan pipeline and tankers project, increased fracking and the Site C megadam—a boondoggle that will subsidize fossil fuel exploitation and drive ever increasing Hydro bills for decades to come.

“If we want a thriving economy and good, green, family-supporting jobs, we need a budget that will drive a shift to a sustainable, post-carbon economy.

“We need affordable, climate-friendly energy sources that will create jobs in communities throughout B.C. and drive innovation in clean technology.

“We need a genuine commitment to forest health, not the re-announcement of last year’s reforestation funding and no real plan for how our forests will aid in climate action.

“For years, this government has treated the environment and climate change as an afterthought. This budget is no exception.

“It’s a blindness that will hurt our economy and rob us of jobs, as other jurisdictions leave us behind in innovation, as the market for fossil fuels evaporates and as British Columbians are left to pay down mountains of debt.”

Media Centre
Sierra Club BC is seeking an Executive Director 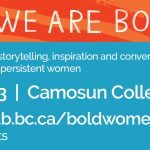 When We Are Bold: Women Who Turn our Upsidedown World Right
Scroll to top
MENU