New government mapping of at-risk old-growth calls for urgent action. But the pace of change on the ground remains uncertain, which could unleash a race to the bottom

Xʷməθkʷəy̓əm (Musqueam), Sḵwx̱wú7mesh (Squamish) and səlilwətaɬ (Tsleil-Waututh) (VANCOUVER, BC) — Sierra Club BC commends the B.C. government’s new information and mapping on the state of old-growth forests in B.C. and their intention to defer logging across 2.6 million hectares of the most at-risk old-growth forests. But the organization remains very concerned about the lack of certainty on when deferrals will be implemented and funding for Indigenous Nations and forestry workers that would enable the transition.

“The work by the technical advisory panel shared today by the B.C. government shows the province’s ecological emergency in unprecedented detail and pinpoints which old-growth forests need immediate interim protection. Despite delays, it’s not too late to use this new mapping to stop the ongoing destruction of the most at-risk old-growth forests and implement the paradigm shift towards ecological integrity while respecting Indigenous jurisdiction,” said Jens Wieting, Senior Forest and Climate Campaigner at Sierra Club BC.

“Making the paradigm shift a reality will depend on quickly offering clarity on where and when the next logging deferrals will hit the ground and what level of support communities can count on. Without these steps, today’s announcement would be equivalent to adding tigers to the red-listed species, but not ending the hunt immediately,” added Wieting.

“The significance of the new old-growth analysis and maps cannot be overstated. In the case of both the biodiversity and climate crises, using scientifically accurate information is paramount to assess risk and inform solutions. Now that this information exists, the B.C. government must show the same courage and leadership to act on these important findings,” added Wieting.

Today’s announcement also included $12.69 million in capacity funding for First Nations while they make decisions on logging deferrals in their territories, but falls short on details when it comes to transition financing to support Indigenous Nations and forestry workers and didn’t include any information on financing for Indigenous-led conservation solutions. Making the Declaration on the Rights of Indigenous Peoples a reality requires adequate funding to give First Nations a real choice when it comes to ending destructive resource extraction on their lands and waters.

The province must quickly find ways to ensure that all logging companies in B.C. pause logging of any of the most at-risk old-growth forests.

“Without binding mechanisms for all operators, there is a risk that the new mapping could unleash a race to the bottom if operators decide to cut down the identified at-risk forests before interim protection is in place,” added Wieting.

Immediate reductions to the annual allowable cut while logging deferrals take effect will be needed to prevent pushing planned logging from one area into another one. Additionally, regular updates on the progress made implementing deferrals for all of the most at-risk old-growth forests is paramount to address delays and create accountability.

“For several months, international news from B.C. has been about police arresting forest defenders to clear the path for clearcutting some of the last old-growth forests on Southern Vancouver Island. The world is watching from the UN conference in Glasgow and elsewhere, eagerly waiting for news on when at-risk old-growth forests in B.C. will be truly protected,” said Wieting.

For more information on the data and maps provided by the Technical Advisory Panel visit: https://www2.gov.bc.ca/gov/content/industry/forestry/managing-our-forest-resources/old-growth-forests/old-growth-maps

Media Centre
Donate to help pay for our campaigners’ expenses at COP26! 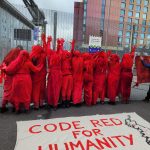 Sierra Club BC media availability on last day of COP26 and what it means for...
Scroll to top
MENU