“The approval of the Woodfibre LNG terminal shows that the new federal government is not taking the climate emergency seriously. Data released from NASA earlier in March shows an alarming acceleration of global temperature increase. We are in a state of climate emergency, yet the first decision our Minister of Environment and Climate Change makes using a limited climate test is to approve a fossil fuel project. Climate-damaging projects like Woodfibre will contribute in a major way to pushing global temperatures further into uncharted, very dangerous territory.

“This is the first case where the federal government applied a limited climate test to a proposed infrastructure project; however, it failed to do so in a scientifically rigorous manner. The review looked only at upstream emissions of the proposed LNG terminal and neglected to consider those created from the burning of exported fossil fuels. The government’s own limited data shows clearly that the projects will further worsen the chances of the provincial and federal governments meeting their emission reduction targets.”

“The climate test must not be allowed to become a rubber stamp for climate polluting projects. It must ensure that new infrastructure projects can only be approved if they allow us to hit our climate targets, thus helping us move investments towards a post-carbon economy. Alternatives to fossil fuel projects are readily available. It is these types of projects the government must focus on if it is to have any chance of hitting its Paris commitment to keep global warming below 2 degrees Celsius above pre-industrial levels.

The Woodfibre LNG project in Squamish was the first major project in B.C. to have an addendum analysis on upstream greenhouse gas emissions as part of the Canadian Environmental Assessment Agency (CEAA) review process. The CEAA calculated that the upstream GHGs for Woodfibre will be 700 to 800 kilotonnes per year or 17.5 to 22 million tonnes over 25 years.

According to the Pembina Institute the GHG emissions associated with the project will be close to one million tonnes of carbon dioxide annually (this without accounting for the higher leakage rateand global warming potential for methane based on best available information). For B.C., this would represent 7 per cent of the legislated 2050 target. 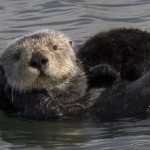 All about sea otters
Scroll to top
MENU